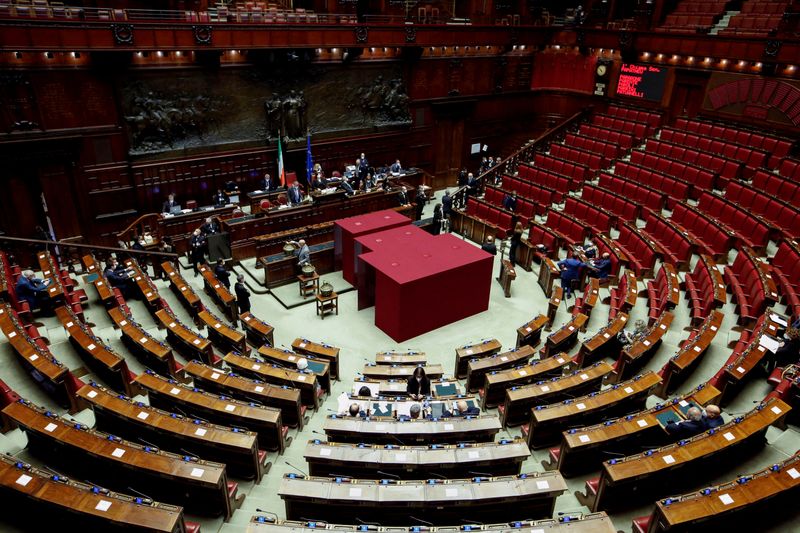 © Reuters. A general view of the Chambers of Deputies as it continues voting to elect the country’s new President, in Rome, Italy, January 29, 2022. REUTERS/Remo Casilli/Pool

ROME (Reuters) -Italy’s ruling parties asked Sergio Mattarella on Saturday to carry on as president for a second term after failing to find a compromise candidate in a week of often fraught voting in parliament.

Mattarella, 80, has always ruled out remaining in office and made no immediate comment, but with the country’s political stability at risk, it looked highly unlikely he would be able to resist the pressure.

“Italians do not deserve any more days of confusion,” said Matteo Salvini, head of the rightist League party, asking Mattarella to “make a sacrifice” for the good of the country.

Prime Minister Mario Draghi, who failed to find any backing for his own ambitions for the job, called Mattarella on Saturday and also urged him to stay on, a political source said.

It is the second time in succession that a president has been asked to renew his seven-year mandate. In 2013, political leaders went cap in hand to the-then head of state, Giorgio Napolitano, after they too failed to find a consensus candidate.

Napolitano reluctantly agreed, but stood aside two years later after a new government was installed, opening the way for Mattarella.

If, as expected, Mattarella accepts a second term, he too would almost certainly resign once the political situation allowed it, commentators have speculated.

The fruitless efforts to replace him have left deep scars on the parties and their leaders, with the centre-right alliance in particular disarray after losing any semblance of unity over the past 24 hours.

While both Salvini’s League and Forza Italia embraced the prospect of maintaining the status quo, their ally the Brothers of Italy, which has not joined them in the ruling coalition, denounced the behind-the-scenes manoeuvring.

“Once again, parliament has shown that it is not fit for Italians,” said Brothers of Italy leader Giorgia Meloni, accusing her allies of “bartering away” the presidency to insure the government remains in place until the legislature ends in 2023.

The stakes have been very high. The president is a powerful figure in Italy who gets to appoint prime ministers and is often called on to resolve political crises in the euro zone’s third-largest economy, where governments survive around a year on average.

Unlike in the United States or France, where heads of state get elected in a popular vote, in Italy, 1,009 parliamentarians and regional representatives chose via a secret ballot https://www.reuters.com/world/europe/italian-presidential-elections-shrouded-parliamentary-secrecy-2022-01-13 that party leaders sometimes struggle to control.

Threatening to take charge of the situation themselves, lawmakers have been increasingly backing Mattarella in the daily ballots, with his tally rising to 387 on Saturday from 125 on Wednesday.

A successful candidate needs 505 votes to win. A new vote is scheduled for later on Saturday, which is likely to be decisive.

The repeated failure to find a consensus has poisoned the political atmosphere, with potentially dangerous consequences for the stability of the coalition government.

Draghi himself has made clear he would like the job of president, but the main parties refused to put his name forward, partly out of fears that the abrupt switch of roles could cause the fragile government to implode.

NFTs Were Invented to Protect Artists: What Have They Become Now?