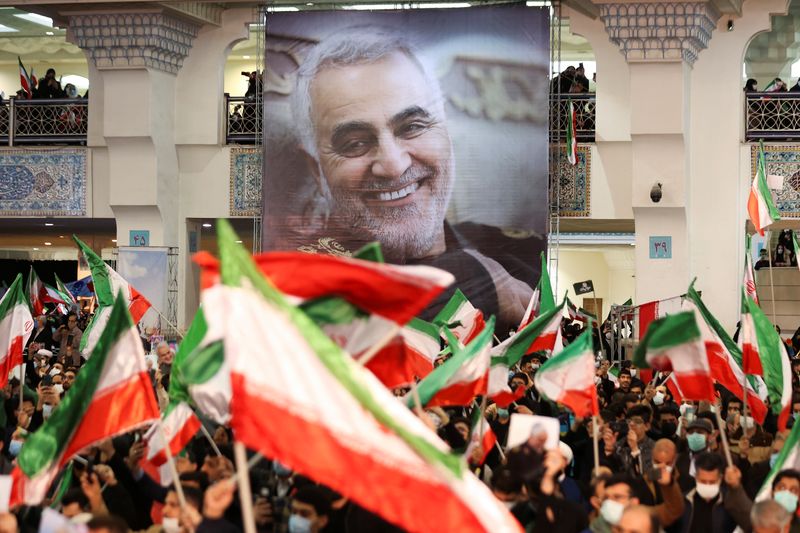 © Reuters. FILE PHOTO: A banner of Qassem Soleimani, is seen during a ceremony to mark the second anniversary of the killing of senior Iranian military commander General Qassem Soleimani in a U.S. attack, in Tehran, Iran January 3, 2022. Majid Asgaripour/WANA (West

DUBAI (Reuters) – The killing of all American leaders would not be enough to avenge the U.S. assassination of Iran’s Revolutionary Guards’ top commander Qassem Soleimani two years ago, a senior Iranian Guards commander said on Wednesday.

The United States and Iran came close to full-blown conflict in 2020 after Soleimani’s killing in a U.S. drone attack at Baghdad airport and Tehran’s retaliation by attacking U.S. bases in Iraq.

“Martyr Soleimani was such a great character that if all American leaders are killed, this will still not avenge his assassination,” senior commander of the Revolutionary Guards (IRGC) Mohammad Pakpour was quoted as saying by Iranian state media.

“We should avenge him by following Soleimani’s path and through other methods.”

Then-U.S. President Donald Trump’s administration said Soleimani was targeted for plotting future attacks on U.S. interests and that he had helped coordinate strikes on American forces in Iraq in the past through militia proxies.

Pakpour’s comments came days after U.S. Army General Mark Milley, chairman of the Joint Chiefs of Staff, said that he does not support removing Iran’s Quds Force, an arm of its Revolutionary Guards (IRGC), from a list of foreign terrorist organizations, as demanded by Tehran for the revival of a 2015 nuclear deal.

Trump abandoned the deal under which Iran had agreed to curbs on its nuclear programme in return for the lifting of international financial sanctions, and Iran responded by violating its limits. President Joe Biden aims to restore it.

Almost a year of indirect talks between Iran and the United States have stalled since March as both Tehran and Washington blame each other for failing to settle remaining issues. One of the unresolved questions is whether the United States would remove Iran’s Guards from the terrorist list.

Washington has been considering removing the IRGC from its foreign terrorist organization blacklist in return for Iranian assurances about reining in the elite force’s influence in the Middle East.

Critics of dropping the IRGC from the list, as well as those open to the idea, say doing so will have little economic effect because other U.S. sanctions force foreign actors to shun the group.

Iran’s top authority, Supreme Leader Ayatollah Ali Khamenei, said on Tuesday that his country’s future should not be tied to the success or collapse of nuclear talks with world powers.