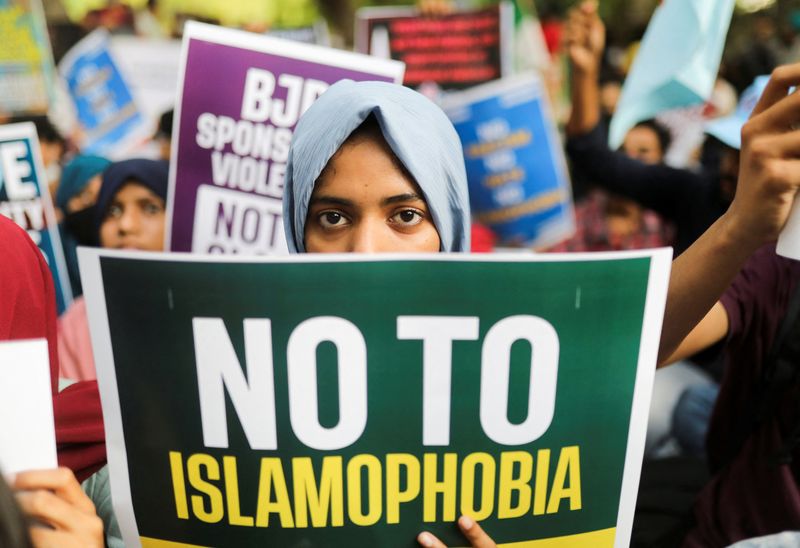 © Reuters. FILE PHOTO: A citizen holds a placard during a peace vigil organised by citizens against what they say is rise in hate crimes and violence against Muslims in the country, in New Delhi, India, April 16, 2022. REUTERS/Anushree Fadnavis

MUMBAI (Reuters) -Indian police arrested 14 people in connection with violent clashes between Hindus and Muslims during a Hindu religious procession in the country’s capital, New Delhi, police said in a tweet on Sunday.

Six police officers and several others were injured on Saturday during scuffles that marred the procession at a festival in Jahangirpuri, a suburban section of New Delhi.

“Remaining rioters are being identified for strict legal action,” the police said.

There were no reported deaths from the incident.

In recent weeks, religious clashes have broken out between the majority Hindu and minority Muslim communities during religious processions in several parts of the country.

The rule of Prime Minister Narendra Modi’s Hindu nationalist Bharatiya Janata Party has emboldened hardline religious groups in recent years to take up causes that they say defend the Hindu faith, although his party has denied any rise in communal tensions during Modi’s reign.

Minority Affairs Minister Mukhtar Abbas Naqvi, who is part of Modi’s government, said in an interview published on Sunday that intolerance among religious communities was not worsening, while he played down recent incidents.

“Fringe elements, who are unable to digest the peace and prosperity in the country, try to defame India’s inclusive culture and commitment,” he told The Economic Times newspaper.

He added that it was not the government’s job to dictate dietary practices to the people, after university students in New Delhi recently clashed on campus over the serving of non-vegetarian food in the canteen during a week that Hindus consider auspicious.

“Every citizen has freedom in the country to eat food of their choice,” Naqvi said.

He also dismissed concerns about a controversy earlier this month over Muslim students wearing the hijab head-scarf to school in the southern state of Karnataka, home to the country’s tech-sector capital Bengaluru.

“There is no ban on hijab in India. One can wear hijab in markets and other places,” he said.

“But every college or institution has a dress code, discipline and decorum. We will have to accept this. If you do not like it, you can choose a different institution.”