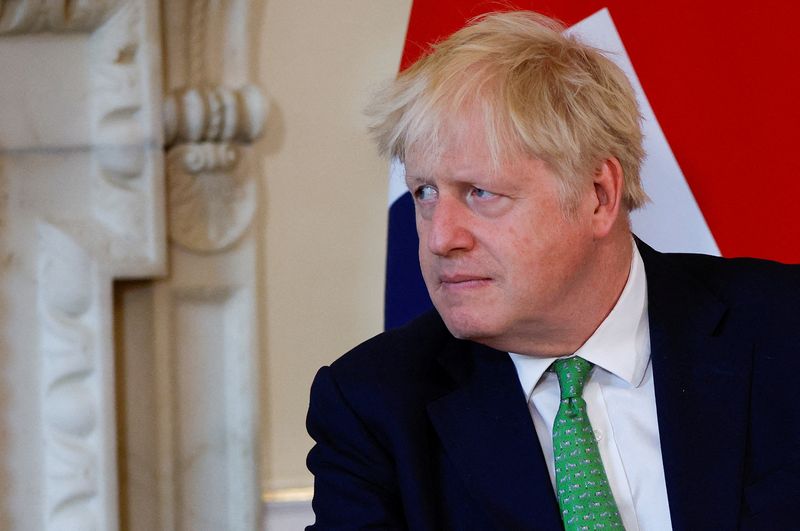 LONDON (Reuters) – Britain’s Boris Johnson vowed on Wednesday to fight on and not give in to a chorus of calls for him to resign, but his defiant pledge to keep going was met with derision and disregard from a mounting number of his own lawmakers.

With the tide of resignations rising to more than 30, some questioned whether Johnson could fill those vacancies at a time when the government needs to tackle a cost-of-living crisis and support an economy heading for a slowdown, possibly a recession.

But despite being all but fatally wounded by a wave of resignations of senior colleagues and junior ministers who said he was not fit to govern, Johnson sought to come out fighting at parliament’s weekly prime minister’s questions session.

He later attended a bizarre session of the so-called liaison committee, where it was almost business as usual as he was questioned by senior lawmakers from across the political spectrum over his government’s policies and future plans.

Arriving in parliament for the appearance, he responded to questions over whether he would quit with the words: “No, no, no.”

Johnson’s immediate fate could be decided as soon as later on Wednesday at a meeting of the so-called 1922 Committee that sets the rules for leadership confidence votes. A spokesperson said Johnson was confident he would win a confidence motion.

“Frankly, the job of a prime minister in difficult circumstances when you’ve been handed a colossal mandate is to keep going,” Johnson said. “And that’s what I’m going to do.”

Earlier, he tried to reassert his authority by quickly appointing Nadhim Zahawi, a rising star in the Conservative Party widely credited for the successful rollout of COVID-19 vaccines, as finance minister.

But Johnson’s performance in parliament encountered a brutal response.

Underlining the tenuous position he is in, some colleagues in his cabinet team of top ministers struggled to contain their laughter as the opposition Labour leader poked fun at his cabinet for being in the “charge of the lightweight brigade”.

Three members of Johnson’s own party asked whether he would resign.

“Clearly, if there were circumstances in which I felt it was impossible for the government to go on and discharge the mandate that we’ve been given” then I would, Johnson said.

Overall, it was a muted performance for a prime minister who has seen his political fortunes tumble from a landslide election victory in 2019 to now, when the resignation of his finance and health ministers opened the floodgates for more junior ministers to quit.

Standing in the backbenches, his former health minister, Sajid Javid, detailed the scandals, missteps and gaffes that have marked Johnson’s tenure so far.

“At some point, we have to conclude that enough is enough. I believe that point is now,” Javid told a silent parliament, with Johnson listening stony faced.

At a later appearance before the chairs of select committees, the prime minister was asked about his defence policies, his stance on Ukraine and Brexit. He appeared to rule out wanting to call an early election.

At one point he was asked if he was suffering memory loss when he could not answer a question – a reference to his excuse for appointing someone who had faced accusations of sexual misconduct.

“I suspect we will have to drag him kicking and screaming from Downing Street,” one Conservative lawmaker told Reuters, speaking on condition of anonymity. “But if we have to do it that way then we will.”

A former journalist and London mayor who became the face of Britain’s departure from the European Union, his landslide 2019 election win soon gave way to a combative and often chaotic approach to governing.

His leadership has been mired in scandals over the last few months, with the prime minister fined by police for breaking COVID-19 lockdown laws and a damning report published about the behaviour of officials at his Downing Street office who breached their own lockdown rules.

There have also been policy U-turns, an ill-fated defence of a lawmaker who broke lobbying rules, and criticism he has not done enough to tackle inflation, with many Britons struggling to cope with rising fuel and food prices.

The latest scandal saw Johnson apologising for appointing a lawmaker to a role involved in party welfare and discipline, even after being briefed that the politician had been the subject of complaints about sexual misconduct.

Downing Street’s narrative changed several times over what the prime minister knew of the past behaviour of the politician, who was forced to resign, and when he knew it. His spokesman blamed a lapse in Johnson’s memory.

That prompted Rishi Sunak to quit as chancellor of the exchequer – the finance minister – and Javid to resign as health secretary.

Several junior ministers who quit cited Johnson’s lack of judgment, standards, and an inability to tell the truth.

A snap YouGov poll found 69% of Britons thought Johnson should step down as prime minister.

A month ago, Johnson survived a confidence vote of Conservative lawmakers. Current party rules mean he cannot face another such challenge for a year but some lawmakers are seeking to change those rules. Were Johnson to go, the process to replace him could take a couple of months.

“As the prime minister constantly tries to deflect from the issue, always tries to blame other people for mistakes and that leaves nothing left for him to do other than to take responsibility and resign,” said Gary Sambrook, a Conservative lawmaker first elected in 2019.

Biggest Movers: SAND up by 12% on Wednesday, Hitting a 10-Day High