How To Ask For a Raise — And Get It: A Step-by-Step Guide

By Winston IbrahimMinutes On Mar 7, 2022

If you’ve been hard at work, exceeding expectations, and hitting bigger goals, but you still haven’t received a raise — maybe it’s time to ask for one.

But if asking for a raise sounds intimidating to you, look no further than this step-by-step guide on how to ask for a raise for a boost of confidence to ask for your well-deserved pay increase.

What To Do Before Asking For a Raise

Asking for a raise is nothing out of the ordinary, especially if you know you’ve been a valued employee at your company—in fact, only 37 percent of workers have asked for a raise before.

However, before requesting a raise, there are some things you should consider. These factors include: how long you’ve been working for the company, the company financial situation, and promotion plans, as well the quality of your performance.

When evaluating your reasons for a salary raise, take into consideration what you bring to the team, and gather any feedback and accomplishments during your employment. 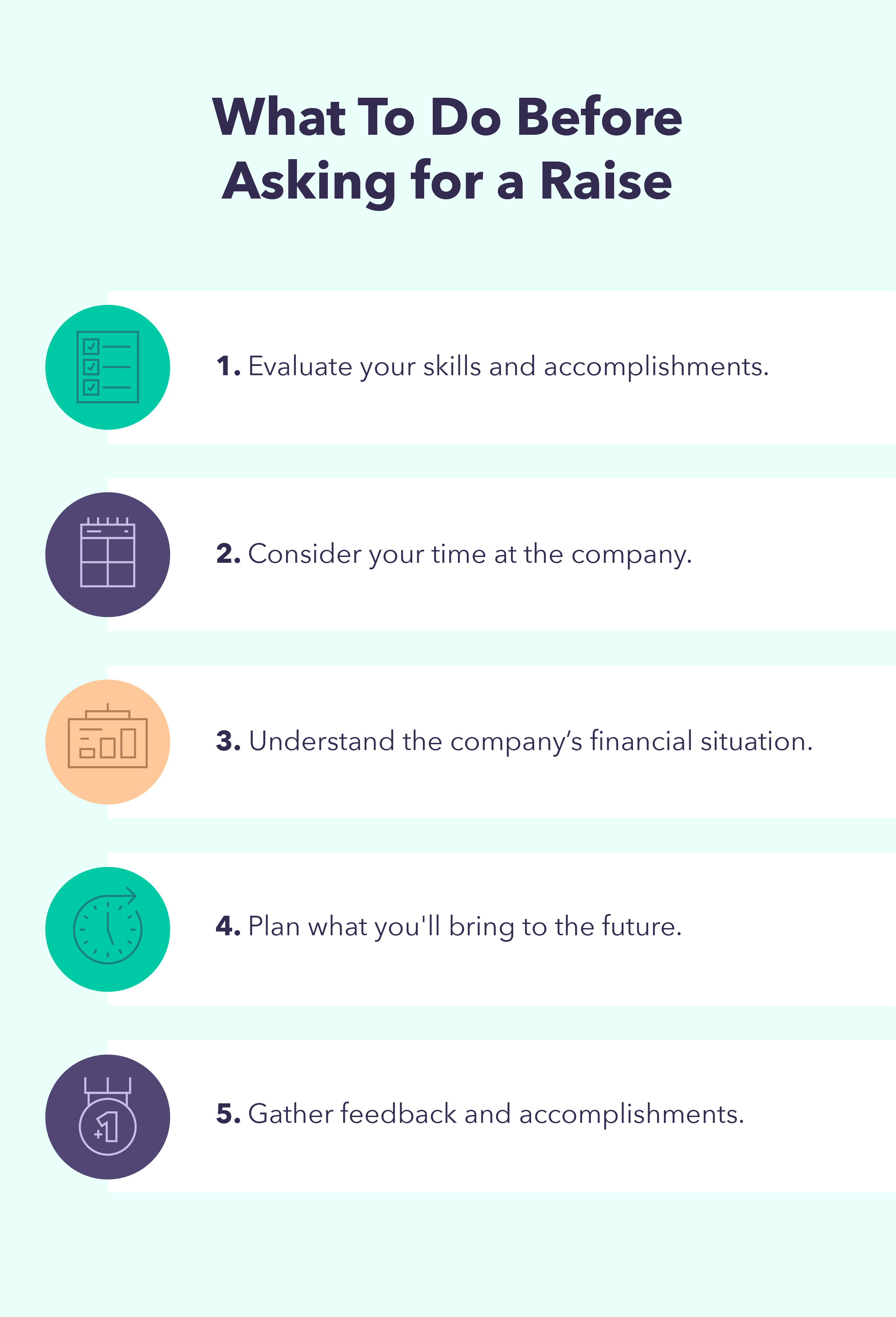 How To Ask For a Raise

1. Figure Out The Best Time To Ask For a Raise

Although asking for a raise during these times makes sense, it’s also important to take into consideration other factors that could impact your chances of getting a raise. Here are some questions to ask yourself when picking the best time to ask:

But what is an appropriate salary raise? To better understand how much of a salary increase you should ask for, take some time to research salary trends around your area. Taking a look at how much other workers in the same field are making could help you better understand your potential pay grade.

If most positions around your area are offering more than what you’re making, you could use it as leverage when asking for a raise. You can also research job openings and compare the qualifications with your own position and accomplishments to help you determine a salary increase that makes the most sense.

Your qualifications and accomplishments can help you build a better case as to why you’re asking for a raise. Compile a list of all your qualifications, such as education, certifications, years of experience, and soft and hard skills. After that, write down a list of all your accomplishments during your employment. Don’t sell yourself short, be specific with numbers, feedback, and any value that you bring to the company.

4. Come Up With a Raise Number

So what is a reasonable raise to ask for? Although employers expect to pay an average 3 percent raise in 2022, there’s no set amount of how much your salary increase can be.

With that said, being specific with what you’re asking will increase your chances of getting a raise. Whether you’ll be asking for a percentage increase or a set number, doing your research on salary trends and gathering your qualifications and accomplishments will also help you decide how much of a raise you deserve.

With the appropriate number in mind and the reasons behind it, you’ll now be ready to schedule a meeting with your manager.

The next step is to set up a meeting with your manager or supervisor. The ideal way to ask for a raise is in person—or through a video call if working remotely—preferably in private. To show professionalism, avoid discussing a potential raise through email or in common areas in the workplace.

Whether you’ll be requesting a raise during a performance review or scheduling a separate meeting entirely, it’s important to let your manager know of your plans. Here’s how you can approach that:

“I would like to schedule a meeting to discuss my compensation. Can you let me know what day and time work best for you?”

“During our performance review meeting, would you mind if we set apart some time to discuss my compensation?”

Once you schedule a meeting, it’s time to get ready for it. Preparing what you will say can help you feel more confident during the meeting. Take some time to rehearse your presentation, and gather everything you will be presenting to your manager.

This can also be a good time to plan answers to possible questions your manager will ask. Also, get ready for anything unexpected, such as the meeting having to be cut short.

When preparing for the meeting, consider creating and rehearsing a script to ensure you’ve covered all of your points:

Start With A Good Opener

Start by thanking your manager for taking the time to meet with you, and clearly state the purpose of this meeting. This is the time to mention that you would like to discuss your accomplishments and compensation.

Lay Out The Details

After you lay out the details, finish your speech by stating your goals and asking to revisit your compensation.

At this point, be ready to rock your meeting and get the raise you deserve. Remember to arrive early and dress appropriately, just as you would for a new job interview. Come with an open mind and the confidence of knowing that you prepared a lot for this meeting and have the right qualifications.

Once you lay out all the details, be ready to answer questions from your manager. They might ask about why and how you decided on the amount for the raise or more details about your accomplishments.

Aside from these questions, your manager might also want to negotiate the raise amount you’re asking for, so it’s important to learn negotiation tactics and plan to have different raise amounts that are still reasonable for you.

10. Be Prepared For A Response

You can expect not to get an answer from your manager right away. If they say “maybe,” you can ask if it would be alright to follow up and schedule a meeting in the future to discuss the decision. If they say “no,” make sure to ask the reasons behind their decision and how you can earn a raise in the future.

Things To Avoid When Asking For a Raise

Following our 10 steps on how to ask for a raise can guarantee bigger chances of getting one. However, to make sure you get even closer to earning a salary raise, there are some things you should avoid doing.

Avoid focusing on personal reasons for why you are requesting a raise, such as needing to pay bills or feeling burned out. When asking for a raise, you should focus on what you’ve done for the company and how you can contribute to its growth.

Asking at The Wrong Time

Just like one of our tips suggested, you have to find the right time to ask for a raise. Because of that, avoid asking for a raise during a time that the company is in a bad financial situation or when you haven’t had enough notable accomplishments to present.

Coming Up With Wrong Numbers and Accomplishments

Showing your accomplishments with data is very important to paint a picture of what you have done for the company. However, don’t try to make those numbers look bigger and better than they actually are, and don’t take the credit for other people’s accomplishments. If you were part of a team project, you can still mention how you’ve helped and what your team achieved because of your input.

Asking for a raise is your time to shine and show your employer everything you have accomplished, so don’t sell yourself short. Try to be confident and specific with what you’re presenting and show how you can be a great asset to the company.

You should also be careful with how you word what you want to say. In addition to practicing a script, it’s also important to avoid saying things such as “I need more money” or “I think I deserve.” Saying such things can hinder your chances of getting a raise. 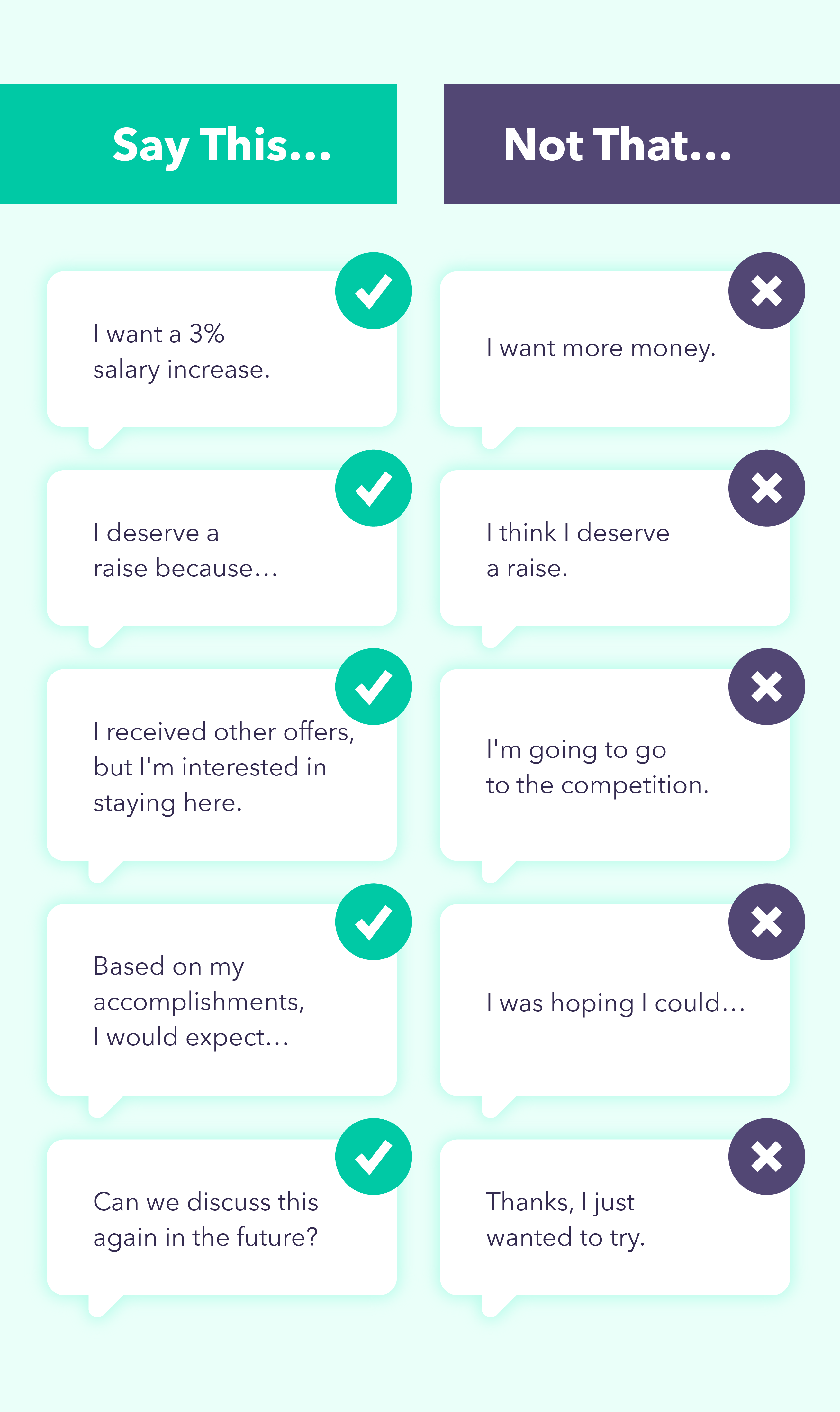 Although 30 percent of people reported they got a pay increase before they even had to ask for a raise, asking for a salary raise is still a normal part of a job. If you believe you’ve accomplished a lot during your employment and deserve it, don’t hesitate and follow our guide on how to ask for a raise.

15 States Whose Auto Industries Were Hit Hardest During COVID-19