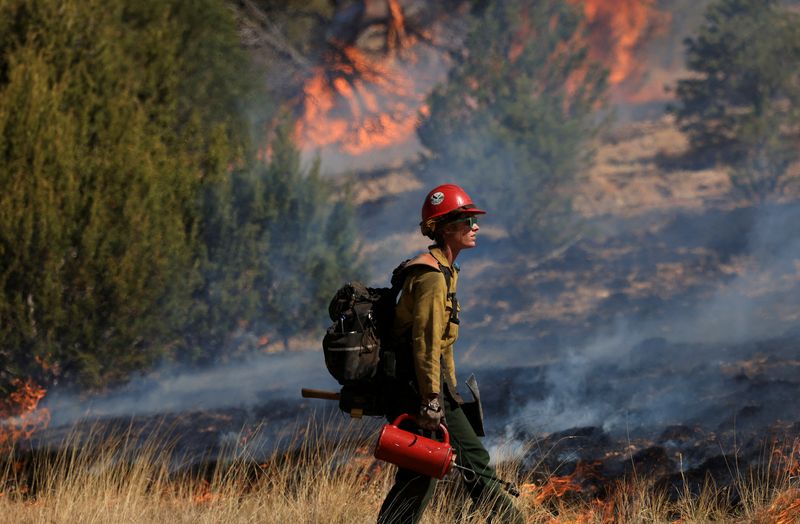 By Andrew Hay and Tyler Clifford

TAOS, N.M. (Reuters) – Firefighting teams in New Mexico braced on Friday for a mix of relentless winds, near-record high temperatures and low humidity expected to stoke a blaze that has chased thousands from their homes in the mountains and canyons near Santa Fe.

Forecasts called for steady gale-force winds of up to 45 miles per hour (72 km/h) to sweep the northern New Mexico fire zone starting Saturday, accompanied by temperatures in the 90s Fahrenheit and single-digit humidity readings.

U.S. Forest Service officials said the extreme winds, expected to persist into early next week, would likely hasten the spread of the Hermit Peak/Calf Canyon wildfire, which had scorched more than 168,000 acres (67,987 hectares) as of Friday.

At least 165 dwellings have gone up in flames since the blaze erupted on April 6, though no casualties have been reported.

More than 12,775 homes in Mora and San Miguel counties combined, two of the hardest hit by the blaze, were under evacuation orders, Michael De Fries, a spokesperson for the incident management team, said on Friday.

Residents of another 3,000-plus homes have been advised to be ready to flee on short notice, officials said.

“I’m reiterating to you now, it’s time to go,” he said at a news briefing on Friday evening.

Officials earlier this week said as many as 60% of Mora County residents in evacuation zones were staying put to help defend properties their families have occupied for generations, even as some run low on food and water.

The risks are high, even to firefighters, authorities said.

“There’s absolutely no human that can outrun a fire that is going to move as rapidly as this fire is going to move in the next couple of days,” Todd Abel, a battalion chief with the National Wildfire Coordinating Group, told the evening briefing.

He said the worsening weather outlook would pose “some of the harshest firefighting conditions that I’ve seen.”

The fire, which had already blackened an area about half the land mass of New York City, was 20% contained on Friday morning as it raged through drought-parched vegetation around several centuries-old farming and ranching communities in the Sangre de Cristo mountains northeast of Santa Fe, the state capital.

De Fries said the firefighting force of nearly 1,400 personnel was scrambling in advance of the heavy winds to “create stronger, deeper” buffer lines by clearing away unburned vegetation around communities in harm’s way.

The Hermits Peak/Calf Canyon blaze was the largest, and most destructive, of 11 large active fires reported on Friday by the National Interagency Fire Center across the country, six of them in New Mexico. The five others totaled nearly 93,000 acres combined.

The fire consists of two blazes that ignited about two weeks apart and later merged into one, the first originating from a prescribed-burn project that got out of control. The cause of the second remains under investigation, officials said.

The U.S. wildfire season has gotten off to an especially early start this year, with nearly 23,000 blazes of all sizes burning more than 1.27 million acres to date, compared with some 19,000 fires that had charred 530,000 acres by the same point in 2021, according to the Idaho-based fire agency.