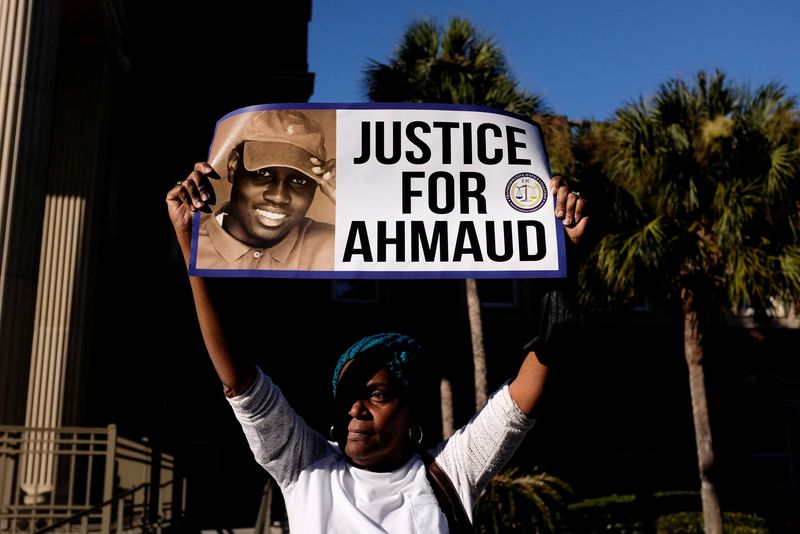 © Reuters. FILE PHOTO: A woman holds a sign outside the Glynn County Courthouse after the jury reached a guilty verdict in the trial of William “Roddie” Bryan, Travis McMichael and Gregory McMichael, charged with the February 2020 death of 25-year-old Ahmaud Arbery,

BRUNSWICK, Ga. (Reuters) -The three white men convicted of murdering Ahmaud Arbery acted out of “racial anger” when they chased the young Black man as they saw him jogging through their Georgia community, a federal prosecutor told jurors at the defendants’ hate-crimes trial on Monday.

Defense lawyers argued that their clients, despite a lengthy record of racist discourse, pursued Arbery because they were suspicious of his conduct, not because of his race.

The defendants – Travis McMichael, 36; his father, Gregory McMichael, 66; and neighbor William “Roddie” Bryan, 52 – have already been convicted of murder in state court and sentenced to life in prison in an earlier trial that largely skirted racism and focused on proving a homicide case.

Wednesday will be the second anniversary of the day Arbery, 25, was out for a Sunday afternoon jog when the McMichaels spotted him running by their home, grabbed their guns and jumped in their pickup truck to follow him. Bryan joined the chase in his own truck before Aubrey was cornered and confronted face to face by the younger McMichael, who fired three shotgun blasts at Arbery at close range, killing him.

The encounter, captured in cellphone video recorded by Bryan, stirred public outrage when it surfaced on social media some two months later. At the time the video surfaced, no arrests had been made.

Arbery’s name became entwined with a host of others invoked in protests that swept the country after George Floyd was killed in Minneapolis by a white policeman kneeling on the unarmed Black man’s neck in May 2020.

‘THEY THOUGHT THE WORST OF HIM’

Christopher Perras, a special litigator for the U.S. Justice Department’s civil rights division, said in his summation on Monday that Arbery was singled out because of the color of his skin.

“They were motivated by racial assumption, racial resentment and racial anger,” Perras said, referring to the defendants. “They saw a Black man in their neighborhood and they thought the worst of him.”

Arbery’s parents, Marcus Arbery Sr., and Wanda Cooper-Jones, were in court Monday. Cooper-Jones sobbed when Perras’s colleague, Assistant U.S. Attorney Tara Lyons, listed for jurors some of the disparagements and racist insults the defendants had directed at Arbery.

“This case is about how these three defendants saw Ahmaud,” Lyons said.

Defense attorneys countered that their clients believed they recognized Arbery from previous videos taken by a neighbor showing a person lurking on four occasions around a vacant house under construction amid a series of property thefts in the community. There was no evidence that Arbery ever stole anything.

Amy Lee Copeland, representing Travis McMichael, said prosecutors presented no evidence that her client “ever spoke to anyone about Mr. Arbery in racial terms” or used a racial slur on the day of the killing. And she added that the government never connected McMichael to any white supremacist or hate groups.

A.J. Balbo, the attorney Gregory McMichael, argued that the defendants were motivated by a desire to protect their neighborhood.

“Yes, the n-word six times is six times too many, but it is not evidence (of a hate crime),” he told jurors.

All three men are charged with depriving Arbery of his civil rights by attacking him because of his race, as well as with attempted kidnapping. The McMichaels are additionally charged with a federal firearms offense.

The hate-crimes felony, the most serious of the charges, carries a maximum penalty of life in prison.

After the McMichaels agreed last month to plead guilty to the federal hate-crimes offense, the son acknowledged in court that he singled out Arbery because of his “race and color.”

Judge Wood rejected the plea bargain because it bound her to a 30-year sentence that prosecutors had agreed would be served in a federal lockup before the men were returned to the Georgia prison system, widely perceived as a tougher environment for inmates compared with federal penitentiaries.

The plea deals were then withdrawn.