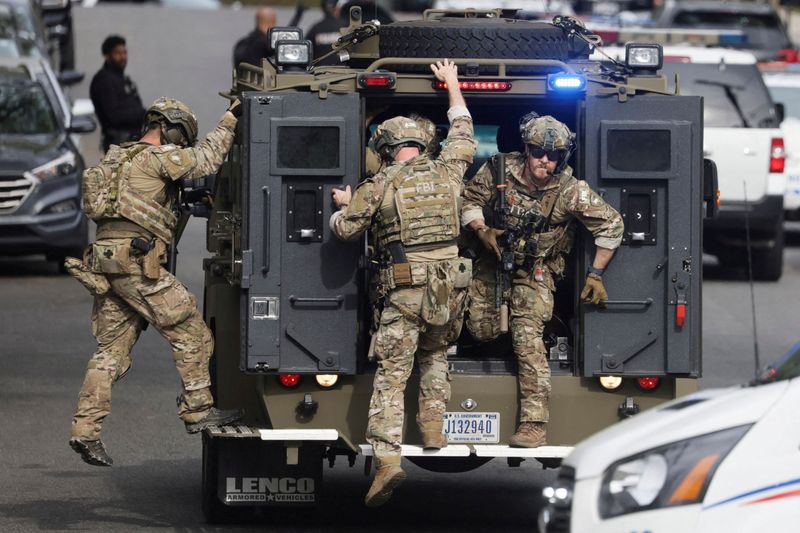 © Reuters. An FBI tactical team deploys from an armored vehicle at the scene of a reported shooting and active shooter near Edmund Burke Middle School in the Cleveland Park neighborhood of Northwest Washington, U.S., April 22, 2022. REUTERS/Evelyn Hockstein

By Chris Gallagher and Steve Gorman

WASHINGTON (Reuters) -A gunman opened fire on random victims from a sniper’s nest in an apartment building near an elite prep school in the nation’s capital on Friday, wounding four people, before taking his own life as police closed in, officials said.

Police said the suspect, Raymond Spencer, 23, of suburban Fairfax, Virginia, was initially identified from video he had posted on social media that appeared to show gunshots fired from the vantage point of an upper-floor window, with the misspelled label: “Shool shooting!”

Washington Metropolitan Police Chief Robert Contee told a late-night news conference the video “looks very much to be authentic,” but it remained uncertain whether the footage was streamed live or had been posted after it was recorded.

Police had issued a bulletin with photographs of Spencer hours earlier saying they were seeking him as a “person of interest” in their investigation.

The shooting and manhunt paralyzed the upscale Van Ness neighborhood of northwest Washington next to the Edmund Burke School, a private college preparatory academy, just as classes were about to be dismissed for the day.

The school and other properties in the vicinity were placed under a security lockdown, with frightened students texting anxious parents as police mounted a door-to-door search for the suspect.

With help from eyewitness reports, police managed to pinpoint the gunman’s position to the fifth floor of a “particular apartment building” and ultimately “breached the location where the suspect took his own life,” Contee said.

Police seized more than half a dozen firearms, including several rifles, and large amounts of ammunition in the apartment, which had been arranged in a “sniper-type setup” with a tripod weapons mount, the chief said.

“His intent was to kill and hurt members of our community,” but investigators had yet to determine a motive, Contee said, adding that the gunman acted alone.

The four victims were shot at random as “they were going about their business … on the streets of the District of Columbia,” he told reporters.

Three people struck by gunfire were taken to area hospitals – a 54-year-old man and a woman in her mid-30s with severe wounds, and a 12-year-old girl wounded in the arm, Assistant Police Chief Stuart Emerman said during an earlier briefing.

A fourth victim, a woman in her mid-60s, was treated on the scene for a slight graze wound, Emerman said.

The late-afternoon violence unfolded along a busy Connecticut Avenue corridor that is also home to several foreign embassies, the Howard University School of Law and a campus of the University of the District of Columbia.

Deaven Rector, 22, a law student, told Reuters he heard three bursts of gunfire that seemed to emanate from the AVA Van Ness apartment building where he lives, and which was evacuated.

“Right now, the police have secured the area, and it’s safe, but the fact that this type of chaos can be caused by a maniac on a regular Friday… The kids were about to get out of school,” he said.

Jennifer DiGiacinto told Reuters she learned of the shooting from a text message from her son, a Burke School 11th grader.

“He said, ‘There’s something bad happening, I need you to turn on the news.’ I said, ‘Why, what’s happening?’ And he said, ‘Gunfire, I’m under a desk, we’re barricaded in.’”

Local news footage showed Connecticut Avenue blockaded by emergency vehicles. Dozens of police vehicles with flashing lights were parked outside the school building, as police in full tactical gear and some in camouflage assembled nearby.

Local NBC affiliate WRC-TV showed evacuees from a building running down a sidewalk, some with their hands raised.

Lamenting the trauma of gun violence that has become commonplace in the United States, Washington Mayor Muriel Bowser told reporters, “Unfortunately, I had to look in parents’ eyes tonight who were terrified. And they were terrified thinking of what might happen to their children.”

Zelenskiy warns Russia is eyeing other countries after Ukraine