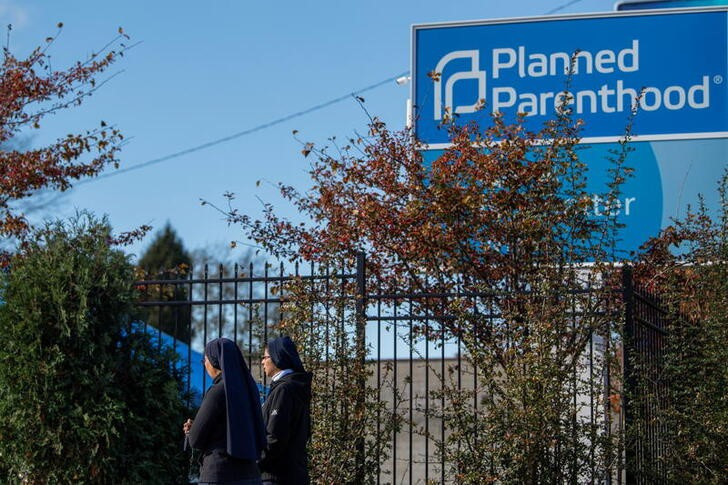 By Nate Raymond and Joseph Ax

(Reuters) -Judges in Florida and Kentucky on Thursday moved to block those states from enforcing bans or restrictions on abortion after the U.S. Supreme Court last week overturned the 1973 Roe v. Wade decision that had established a nationwide right to it.

In Tallahassee, Florida, Circuit Court Judge John Cooper said he would grant a petition from abortion rights groups to temporarily put on hold a state law that would bar abortions after the 15th week of pregnancy.

In Kentucky, Jefferson County Circuit Judge Mitch Perry issued a temporary restraining order preventing the state from enforcing a ban passed in 2019 and triggered by the Supreme Court’s decision.

Also on Thursday, the high court threw out lower federal court rulings that had invalidated abortion limits in Arizona, Arkansas and Indiana based on Roe.

The Florida and Kentucky decisions came amid a flurry of litigation by abortion rights groups seeking to preserve the ability of women to terminate pregnancies after Friday’s historic ruling by the conservative-majority Supreme Court.

That ruling gave states the authority to deny, limit or allow abortions. Bans and restrictions are now taking effect or are poised to do so in 22 states, including 13 like Kentucky with so-called “trigger” laws designed to take effect if Roe v. Wade was overturned, according to the Guttmacher Institute, an abortion rights advocacy research group.

State courts in Texas, Louisiana and Utah have also temporarily blocked bans in those states since last week, and abortion providers are seeking similar relief in states including Idaho, Ohio, Mississippi and West Virginia.

The injunctions have bought clinics time to continue providing services.

“Delay is still saving lives,” said Seema Mohapatra, a professor of health law at Southern Methodist University in Dallas. “The longer safe and accessible abortion is available in those states, the more pregnant people seeking abortion care will be helped.”

In the long term, however, abortion rights supporters face tough odds. The highest courts in many of those states are dominated by conservative or Republican justices who may be more sympathetic to restrictions on abortion access.

FLORIDA’S BAN TO BE PUT ON HOLD

Florida’s 15-week ban, which Republican Governor Ron DeSantis signed into law in April, had been set to take effect on Friday. The law mirrors the Mississippi law at the heart of the Supreme Court case that reversed Roe.

In siding with Planned Parenthood affiliates and other abortion providers in Florida, Cooper concluded the law violates the state constitution’s privacy rights guarantees, which the state’s high court has said covers the right to abortion.

Cooper said his decision would only take effect after he signs a written order, which is not likely until Tuesday or later.

A spokesperson for Florida Attorney General Ashley Moody, a Republican, said the state will appeal. The case could eventually reach Florida’s high court, whose composition has changed and now includes all Republican-appointed justices.

Only about a fifth of state supreme courts have recognized a right to abortion independent of Roe v. Wade. The Iowa Supreme Court earlier this month reversed itself by finding that the state’s constitution does not include a “fundamental right” to abortion.

In Kentucky, Perry sided with two abortion clinics, including a Planned Parenthood affiliate, which challenged a trigger ban as well as another law that bars abortions after six weeks of pregnancy, before some women know they are pregnant.

Abortion services had halted in the state since Friday, when the Supreme Court cleared the way for states to enact new bans. Kentucky’s ban permits abortion only to protect women from death or serious injury.

“We’re glad the court recognized the devastation happening in Kentucky and decided to block the commonwealth’s cruel abortion bans,” Planned Parenthood said in a statement.

The decision is temporary, though, and a further hearing is scheduled on Wednesday on the clinics’ request for an injunction to block enforcement of the laws.

State Attorney General Daniel Cameron, a Republican, said in a statement that Perry had no basis under Kentucky’s constitution to allow the clinics to resume performing abortions.

“We cannot let the same mistake that happened in Roe v. Wade, nearly 50 years ago, to be made again in Kentucky,” he said. “We will be seeking relief from this order.”