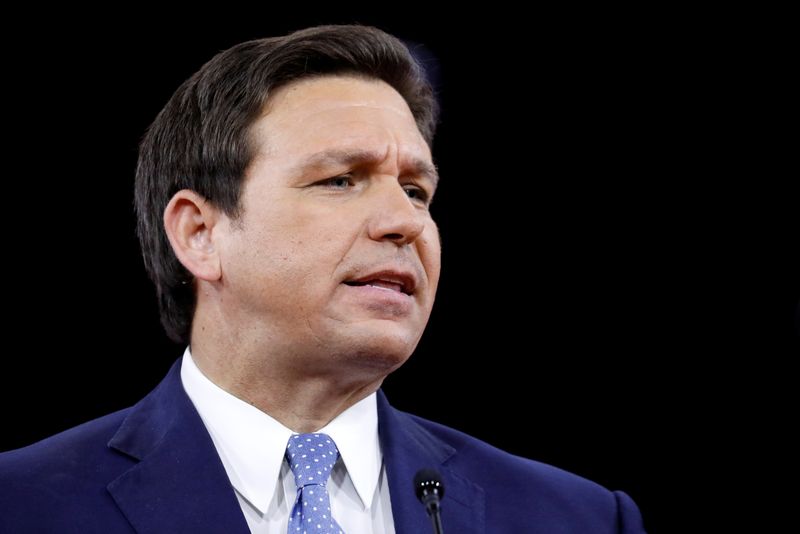 The legislation, referred to by its opponents as the “don’t say gay” bill, has stirred national controversy and got attention during Sunday’s Oscars telecast amid an increasingly partisan debate over what schools should teach children about race and gender.

Formally called the “Parental Rights in Education” bill, the Florida measure bars classroom instruction on sexual orientation or gender identity for children in kindergarten through third grade, or from about ages 5-9, in public schools.

It also prohibits such teaching that “is not age appropriate or developmentally appropriate” for students in other grades.

Under the law, which takes effect on July 1, parents will be allowed to sue school districts they believe to be in violation.

“We will continue to recognize that in the state of Florida, parents have a fundamental role in the education, healthcare and well being of their children,” DeSantis told reporters on Monday. “I don’t care what big corporations say, here I stand. I’m not backing down.”

DeSantis, who is seeking re-election this year and is widely considered to be running for president in 2024, has joined other Republicans nationwide in calling for parents to have more control of what young children learn in school.

The Republican governor signed the bill into law at a charter school in Spring Hill, north of Tampa, surrounded by young school children and parents who shared personal stories that they said showed that the new law is needed.

Students across Florida have protested the measure, and President Joe Biden previously called it “hateful.” The hosts of the Oscars ceremony referenced the bill, while best actress winner Jessica Chastain in her acceptance speech denounced “discriminatory and bigoted” legislation sweeping the country.

After DeSantis signed the bill on Monday, a Walt Disney (NYSE:) Co spokesperson said the legislation “should never have passed and should never have been signed into law. Our goal as a company is for this law to be repealed by the legislature or struck down in the courts.”

LGBTQ and civil rights advocates as well as Democratic politicians have said that such policies will harm the lesbian, gay, bisexual, transgender and queer community.

“DeSantis has damaged our state’s reputation as a welcoming and inclusive place for all families, he has made us a laughing stock and target of national derision,” Equality Florida said in a Twitter (NYSE:) statement. “Worse, he has made schools less safe for children.”

The legislation has been criticized for the vagueness and complexity of some of its language. For example, it says that even discussion of gender identity and sexual orientation is prohibited “in certain grade levels or in a specified manner.”

WASHINGTON (Reuters) – The congressional panel investigating the deadly Jan. 6, 2021, attack on the U.S. Capitol will seek an interview with Virginia Thomas, a Republican activist…

Blinken will test for COVID after having met Bennett, spokesperson says By Reuters – Mar 28, 2022

JERUSALEM (Reuters) – U.S. Secretary of State Anthony Blinken will test for COVID-19 on Monday after having met Israeli Prime Minister Naftali Bennett in Jerusalem the previous…