By Claire AtkinsonMadeline Berg On May 25, 2022 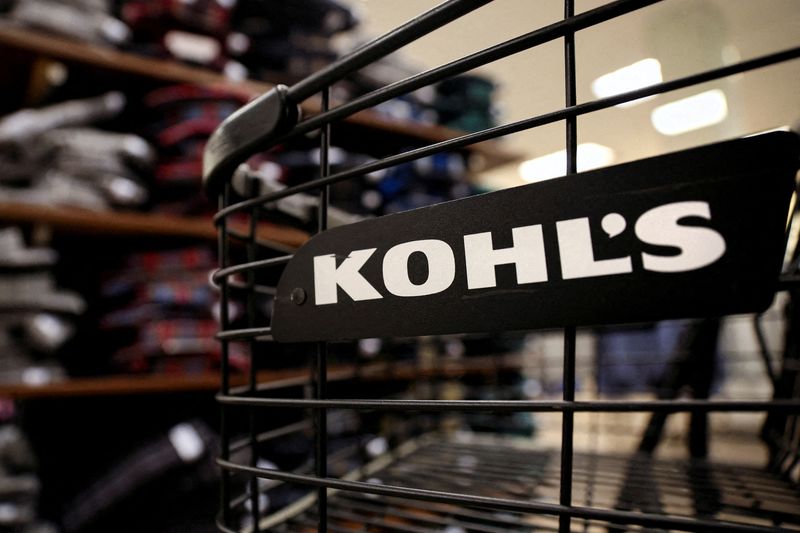 © Reuters. FILE PHOTO: The Kohl’s label is seen on a shopping cart in a Kohl’s department store in the Brooklyn borough of New York, U.S., January 25, 2022. REUTERS/Brendan McDermid

BOSTON (Reuters) – Bidders competing to acquire Kohl’s Corp (NYSE:) are preparing to make binding offers that are lower than the indicative bids they submitted earlier this year to reflect the market downturn and the U.S. retailer’s deteriorating business, people familiar with the matter said.

Starboard Value-backed Acacia Research is also mulling next steps after its bid of $64 a share, made in January, was quickly rejected by the company as being too low.

Some of them had indicated in recent days they were willing to pay as much as $62 per share for Kohl’s, according to the sources. Kohl’s shares are currently trading around $36, having lost more than 40% of their value this month amid concerns that raging inflation and lower consumer spending will weigh on its business prospects.

Earlier this year some bidders had indicated they were willing to pay a higher price, with luxury department store operator Hudson (NYSE:)’s Bay Company signaling it was willing to pay at least $70 a share.

The company cut its full-year earnings forecast last week and said its profit in the first quarter of 2022 fell to 11 cents per share, missing analyst estimates averaging 70 cents, according to Refinitiv data.

The sources requested anonymity because the matter is confidential.

A Kohl’s spokesman declined to comment. The company said on its earnings call last week that it has informed potential buyers about the process of submitting “actionable” bids.

Bidders have been assured by Kohl’s they would have enough time to prepare their offers given the challenging financing environment, the sources said. Real estate investment firm Oak Street Real Estate Capital is expected to offer financing to the bidders, the sources added.

Best and final bids were originally due at the end of May and now bidders might get an additional two weeks, according to the sources.

Kohl’s sizable real estate holdings, which analysts have said could be worth between $4 billion and $6 billion, make an acquisition financeable, the sources said.

Two weeks ago, Kohl’s fended off a board challenge from hedge fund Macellum Advisors, which has been pushing the company to sell itself, arguing management has not done enough to boost sales and improve the business.

Report: The Metaverse Might Contribute $320 Billion to Latam’s GDP in the Next 10 Years