Draghi demands Italian unity as price for staying on as PM 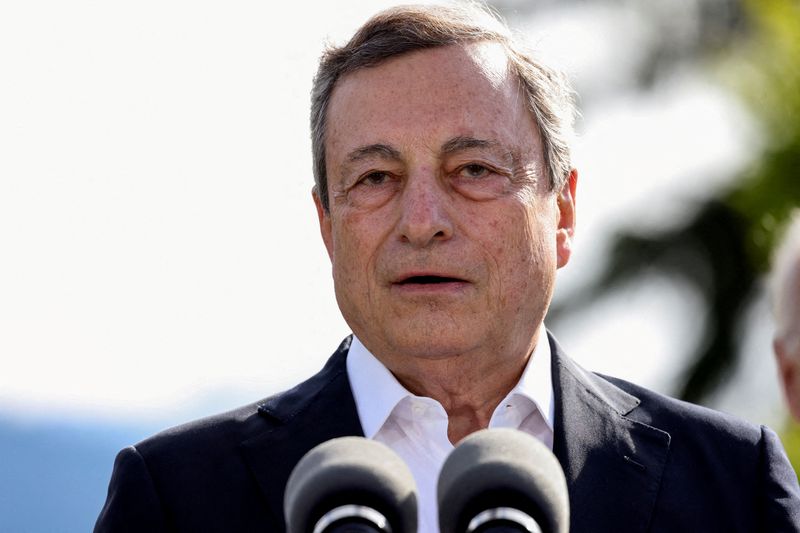 By Giuseppe Fonte and Crispian Balmer

ROME (Reuters) -Italy’s Mario Draghi on Wednesday demanded unity among his broad coalition as the price for staying on as prime minister after the president rejected his resignation last week following a government row.

Draghi set out a series of issues facing the country ranging from the war in Ukraine to social inequality and rising prices, and said political parties needed to get behind him if he was to steer the country to elections due in the first half of 2023.

“Are the parties and you parliamentarians ready to rebuild this pact?” Draghi said in an uncompromising speech to the upper house, adding that was what Italians were demanding.

Draghi had tendered his resignation last week after the populist 5-Star Movement refused to back the coalition in a parliamentary confidence vote. President Sergio Mattarella turned him down and told him to go back before parliament to see if he could revive the 18-month-old administration.

Senators will debate Draghi’s speech for several hours and the result of a vote on his speech was expected by 7.30 p.m. (1730 GMT). A debate on the government’s future is also expected to take place at the lower house on Thursday.

The former European Central Bank chief has enough backing to remain in office without 5-Star, but he has so far rejected that option because his original mandate was to lead a national unity coalition with parties from across the political spectrum.

Complicating efforts to overcome the divisions, the rightist League party and its Forza Italia allies have said they do not want to share power with 5-Star anymore.

If Draghi decides the government can no longer continue, the president is likely to call elections in September or October. Italy has not had an autumn election since World War Two as that is the period normally reserved for drawing up the budget.