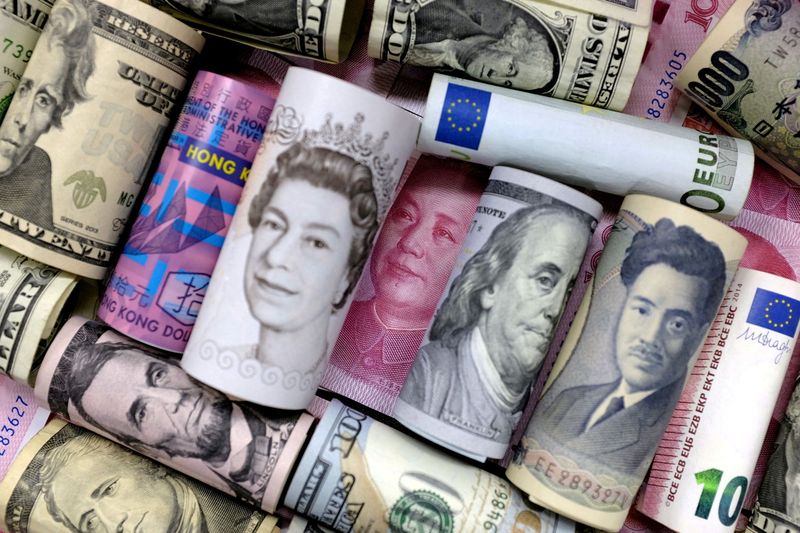 TOKYO (Reuters) – The dollar remained under pressure on Friday, a day after the Bank of England and European Central Bank adopted more hawkish stances than markets had expected, giving a boost to sterling and the euro.

The , which measures the currency against six major peers, slipped 0.06% to 95.914, having hit a more than one-week low on Thursday.

Sterling edged up to $1.33295, after surging as high as $1.33755 for the first time since Nov. 24 in the previous session, when the BoE surprised most market participants to become the first G7 central bank to raise interest rates since the beginning of the pandemic.

The euro gained 0.10% to $1.1340, having hit the highest this month on Thursday, when the ECB outlined plans toward removing stimulus over coming quarters, although it also emphasised policy flexibility.

“But weakness likely does not extend beyond the low 95s” for the dollar index, with the Fed “streets ahead” of the ECB in terms of the tightening cycle, and dips into the mid-95 level a buying opportunity, they said.

On Wednesday, the Fed said it would end its bond-buying programme in March, setting up three quarter-point rate increases next year. The dollar index initially jumped to a three-week high, before beginning its current slump.

“It seems the Fed pencilling in three hikes for 2022 and (sounding) optimistic about the economic prosperity – even in the face of Omicron – has allowed other central banks the ability to take a more hawkish turn,” Chris Weston, head of research at brokerage Pepperstone in Melbourne, wrote in a report.

Despite current dollar weakness, Weston says he doesn’t expect much more upside in sterling given “the news flow seems skewed to the negative side of the ledger.”

The different paths taken by major central banks underline deep uncertainties about how the fast-spreading Omicron variant will hit economies and about how much each should do to fight surging inflation, which is hitting hard in the United States and Britain, but less so in Europe.

The Bank of Japan on Friday dialed back emergency pandemic-funding but maintained ultra-loose policy and extended financial relief for small firms, cementing expectations it will remain among the most dovish central banks for the foreseeable future.

The yen, which tends to rally in times of market stress, rose as high as 0.23% to 113.445 per dollar as Omicron worries simmered.

U.S. President Joe Biden warned on Thursday of “a winter of severe illness and death” for the unvaccinated, while Australia’s COVID-19 cases hit a pandemic high on Friday.

Americans rush for vaccine boosters ahead of Omicron wave