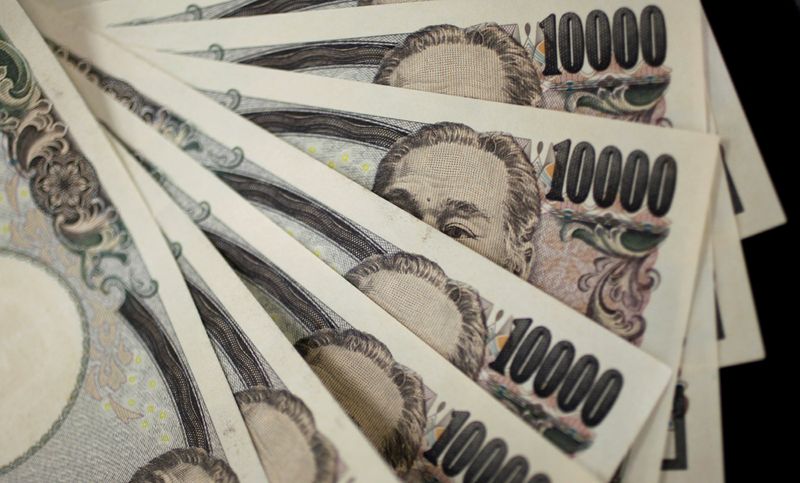 LONDON (Reuters) – The dollar rose on Tuesday to a fresh 20-year high against the Japanese yen and tested a two-year peak against the euro, supported by high U.S. Treasury yields.

Ten-year U.S. inflation-linked bond yields are within touching distance of turning positive for the first time in two years.

The , which measures the greenback against six other currencies, climbed past 101 for the first time in more than two years. It was flat at 100.84 at 1155 GMT.

The dollar has risen 5.4% on the yen so far this month, which would be its second-biggest monthly percentage gain since 2016 after last month’s 5.8%.

The greenback rose to its highest of 0.9492 since July 2020 against the Swiss franc.

Expectations that the U.S. Federal Reserve will tighten its monetary policy have continued to provide support to the dollar.

U.S. inflation is “far too high”, St. Louis Federal Reserve Bank President James Bullard said on Monday as he repeated his case for increasing interest rates to 3.5% by the end of the year.

In the meantime, the BoJ has been intervening to keep the yield on Japanese 10-year government bonds around 0% and no higher than 0.25%.

Many investors are betting the yen has further to fall. The latest CFTC data for the week ending April 12 shows net short yen positions are the largest in three and a half years.

Japanese Finance Minister Shunichi Suzuki made the most explicit warning against the yen’s recent slump on Tuesday, saying the damage to the economy from a weakening currency at present is greater than the benefits from it.

European currencies weren’t helped by the latest fighting in Ukraine.

The Australian dollar briefly rose to $0.740 from Monday’s one-month low, given some support by minutes published Tuesday from the Reserve Bank of Australia’s April policy meeting, which suggested the central bank was edging closer to raising interest rates for the first time in more than a decade.