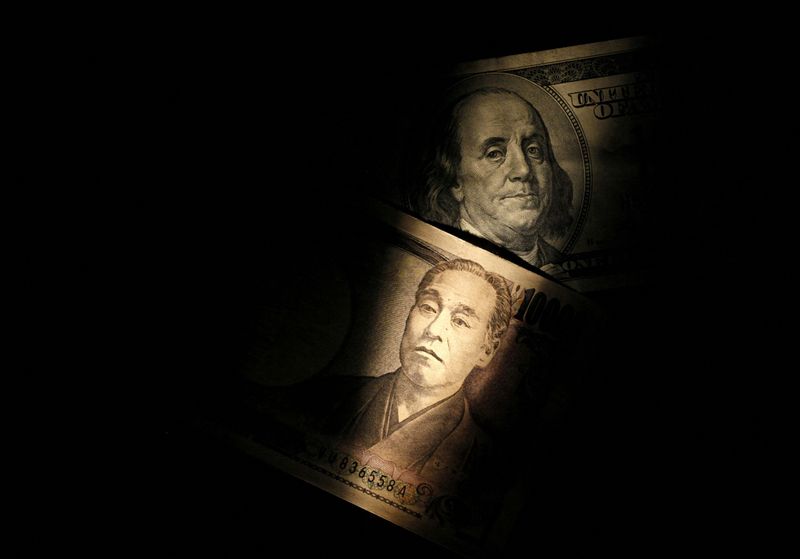 © Reuters. FILE PHOTO: Light is cast on a U.S. one-hundred dollar bill next to a Japanese 10,000 yen note in this picture illustration shot February 28, 2013. REUTERS/Shohei Miyano/Illustration

LONDON (Reuters) – The dollar hit a six-day high in early trading on Tuesday following a jump in U.S. Treasury yields, while the yen steadied after the Bank of Japan saying it would stick to its ultra-loose monetary policy caused the currency to slip versus the dollar.

The U.S. Federal Reserve meets next week. It is expected to raise rates in March, for the first time since the start of the coronavirus pandemic, and investors are pricing in four rate hikes in all during 2022.

As investors prepared for the possibility of the Fed being more hawkish than expected, Treasury yields jumped, with two-year yields – which track short-term rate expectations – crossing 1% for the first time since February 2020.

German investor sentiment hit its highest in six months in January on expectations the incidence of COVID-19 cases will fall by early summer, allowing growth in Europe’s largest economy to pick up, the ZEW survey showed.

“We expect the U.S. rate rethink – and this latest shift higher in yields reflects a push higher in the implied terminal rate, rather than just a faster pace of increases initially – to support the dollar in the first half of the year, while global economic recovery will dominate in H2,” Kit Jukes, head of FX strategy at Societe Generale (OTC:) wrote in a note to clients.

“But Bund yields getting above zero will be an interesting test for the dollar.”

The yen slipped after the Bank of Japan said it would maintain its ultra-loose monetary policy even as its global counterparts move towards exiting crisis-mode policies.

“We continue to expect the BoJ to stick to their current policy framework until at least Governor Kuroda’s term ends next April,” wrote MUFG currency analyst Lee Hardman in a note to clients.

“The widening divergence between BoJ and Fed policy expectations should continue to place upward pressure on ,” he wrote.

However, Hardman noted that the pair failed to pass the 117 level as it strengthened this month.

“That failure and the fact that the market was short JPY means the prospect of a quick rebound for USD/JPY is diminishing… some USD/JPY recovery is feasible but this correction could be a sign of the beginning of the end of the trend higher in USD/JPY,” he said.

The central bank unexpectedly cut the borrowing costs of its medium-term loans for the first time since April 2020, with market analysts expecting more policy easing this year to cushion an economic slowdown.

The yuan hit its highest in more than three years, helped by trade settlement inflows.

Elsewhere, bitcoin was little changed around $41,800, still significantly below the all-time high of $69,000 it hit last November.