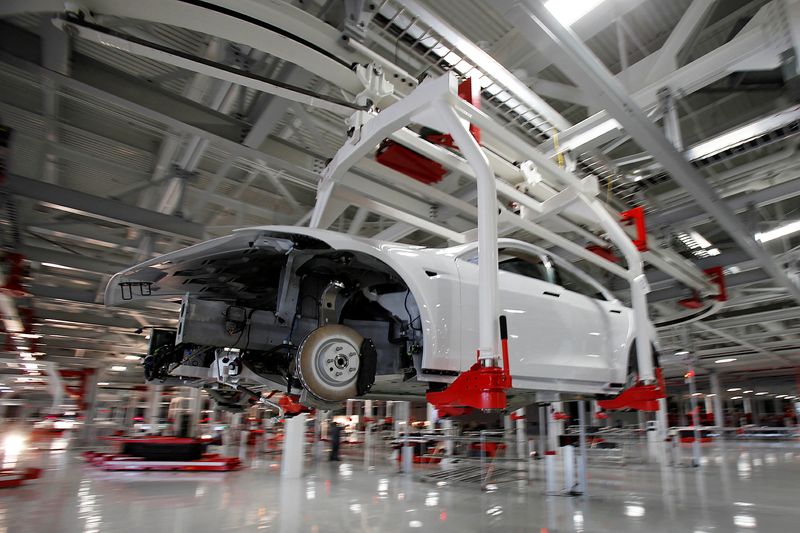 © Reuters. FILE PHOTO: The body of a Tesla Model S is transported by an automated crane at the Tesla factory in Fremont, California October 1, 2011. REUTERS/Stephen Lam/File Photo

(Reuters) – Executives at electric car marker Tesla (NASDAQ:), drug maker Novartis and retailer Bed Bath and Beyond are cutting spending or jobs while others are shelving projects or deals as inflation rages and confidence in the world economy wanes.

Manufacturing growth is slowing worldwide as China’s COVID-19 curbs and Russia’s invasion of Ukraine disrupt supply chains and keep inflation at the highest in years, while the growing risk of a U.S. recession poses a new threat to the global economy. [nL1N2YA111}

More companies are now taking early action to help them weather any downturn, a preview that more drastic cuts may loom when earnings reports pour in next month.

“The overarching concern that corporations have right now is how much will the economy slow down, and can we avoid a recession,” said Art Hogan, chief market strategist at National Securities in New York.

“Markets have been held hostage by fears of an inflation-fighting Fed-induced recession. Those concerns have been front and center for most of the year.”

“In the quarter there was an acute shift in customer sentiment and, since then, pressures have materially escalated, Sue Gove, the company’s interim chief executive officer said in a statement. “This includes steep inflation and fluctuations in purchasing patterns.”

In response, the retailer said it is cutting capital expenditures by about 25% and put on hold plans to remodel and build new stores.

Others are shelving expansion plans or cutting jobs.

South Korean battery maker LG Energy Solution Ltd, a major supplier to U.S. carmakers including Tesla Inc, is reassessing a $1.3-billion investment in an Arizona factory citing “unprecedented” economic conditions, a plan that was unveiled only three months ago.

Tesla, whose Chief Executive Officer Elon Musk previously said he had “super bad” feeling about the economy, has shuttered a California office and laid off about 200 workers. Musk has said the company needs to cut staff by about 10%.

Swiss drugmaker Novartis said on Tuesday a previously-announced restructuring program could lead to 8,000 jobs being cut, or about 7.4% of its global workforce, as it streamlines its oncology business and non-oncology businesses.

More companies are also increasingly finding it difficult to pass rising costs for raw materials and labor to customers as inflation stubbornly sticks to the highest level in decades.

“For the majority of companies, they have to swallow a lot of these price rises themselves, and that means cutting back elsewhere,” said Stuart Cole, head macro economist at Equiti Capital.

“As consumers become more concerned about the economic reality, the first thing they tend to do is eat more at home,” Chief Executive Jeff Harmening said.

Market uncertainty has also left a growing number of deals on hold.

“M&A events tend to get done in stable or rising markets, so volatility like what we have been experiencing so far this year can negatively affect those activities,” said Morningstar analyst Julie Utterback.

Shares in Europe’s largest online meal ordering company Just Eat Takeaway.com hit an all-time low on Wednesday amid dual doubts the loss-making company will successfully sell its U.S. Grubhub operation, and whether it will be able to reach profitability without additional funding.

The sell-off came followed a note by Berenberg analysts initiating coverage with a “Sell” rating. The analysts questioned whether the company would be able to dispose of Grubhub for anything resembling the $5.8 billion it paid for it in an all-shares acquisition that closed in June 2021.