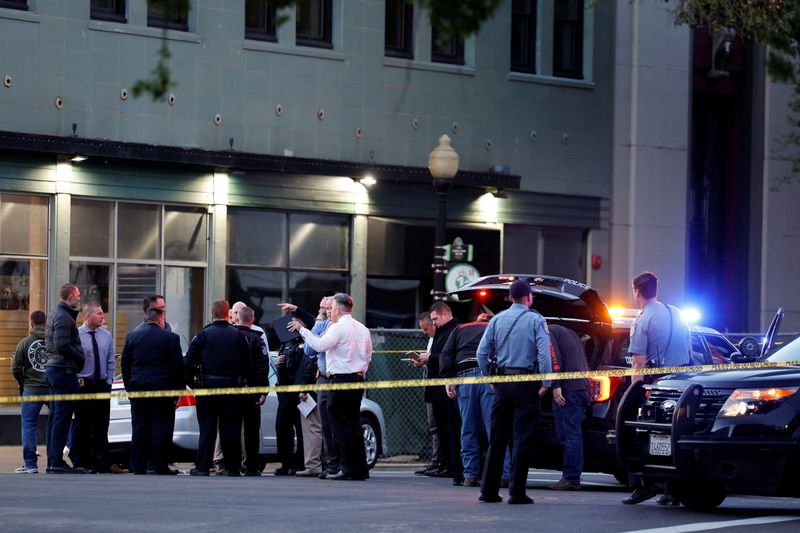 © Reuters. FILE PHOTO: Police are seen after an early-morning shooting in a stretch of the downtown near the Golden 1 Center arena in Sacramento, California, U.S. April 3, 2022. REUTERS/Fred Greaves/File Photo

By Dan Whitcomb and Brendan O’Brien

(Reuters) -A 27-year-old man who was seriously wounded in a shooting in Sacramento over the weekend that left six people dead was arrested on Tuesday for illegal possession of a firearm and possession of a machine gun.

Police in California’s capital city took Smiley Martin into custody at a local hospital, the Sacramento Police Department said in a statement. Authorities will book the suspect after doctors determine that he is fit for incarceration.

Martin is the brother of Dandre Martin, 26, who was taken into custody on Sunday as a “related suspect” in the case, police said. Dandre Martin was booked on suspicion of assault and illegal possession of a firearm.

Dandre Martin made a brief appearance in court in Sacramento on Tuesday where he was advised of the charges against him. Further proceedings were delayed until April 26.

Police did not elaborate on the men’s alleged roles in the shooting and it was not clear if additional suspects remained at large. Police Chief Kathy Lester has said that “multiple” shooters were involved in the massacre that killed six people and injured 12 others.

A third man, 31-year-old Daviyonne Dawson, was taken into custody on Monday on suspicion of being a felon in possession of firearm, police said, but he was not accused of being involved in the mass shooting.

The gunfire erupted at about 2 a.m. local time (0900 GMT) on Sunday near the Golden 1 Center, home of the National Basketball Association’s Sacramento Kings.

Police believe the shooting followed an altercation at a nearby nightclub and asked for the public’s help in obtaining videos of that incident that had been posted on social media.

Investigators said they found more than 100 spent shell casings at the scene and a stolen handgun that was found to have been converted to a weapon capable of automatic gunfire.

Of the 12 victims who survived, police said they were “suffering from gunshot wounds ranging from minor to critical but stable.”

The violence took place in an area recently revitalized as an entertainment center and just hours after rapper Tyler the Creator had performed at the Golden 1 Center on Saturday night.