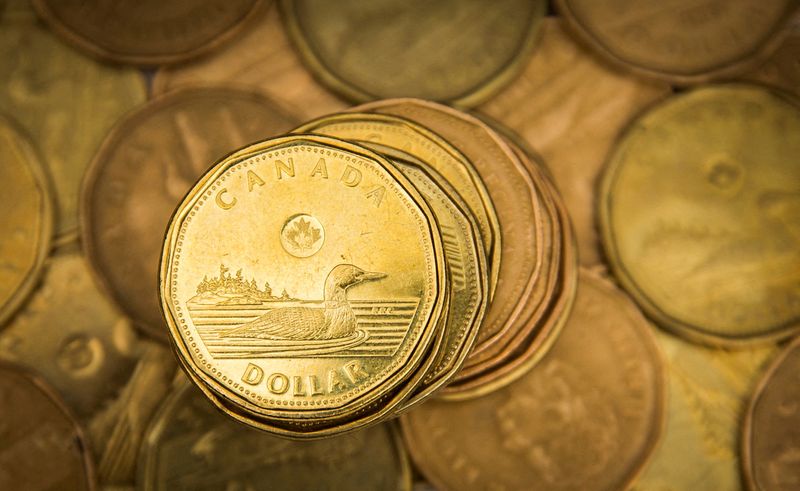 TORONTO (Reuters) – The Canadian dollar rose to its highest level in more than five-weeks against the greenback on Monday, as data showed Canada’s current account surplus turning positive and ahead of an expected interest rate hike this week by the Bank of Canada.

Canada’s current account surplus was C$5.0 billion in the first quarter, swinging from a revised C$137 million deficit in the fourth quarter. It was the widest surplus since the second quarter of 2008.

“We expect the ongoing strength in commodities to support the current account in Q2 (second quarter), though offset by a deeper services deficit as travel recovers more fully,” said Shelly Kaushik, an economist at BMO Capital Markets.

Canada’s GDP data, due on Tuesday, could help guide expectations for the Bank of Canada policy outlook. Money markets expect the central bank to raise its benchmark rate by half a percentage point for a second straight time at a policy decision on Wednesday.

Gains for the came as world share markets rose and the U.S. dollar lost ground against a basket of major currencies, with investors betting on a possible slowdown in U.S. monetary tightening.

The price of oil, one of Canada’s major exports, was up 1.8% at $117.17 a barrel as traders waited to see whether a European Union meeting would reach an agreement on banning Russian oil imports.

oil futures rose 0.6% to $117.17 a barrel as China eased COVID-19 restrictions and traders priced in expectations that the European Union will eventually reach an agreement to ban Russian oil imports.

Canadian government bond yields were higher across the curve, with the 10-year up 3.5 basis points at 2.825%.