By Laurence Fletcher in London and Derek Brower in New York On Apr 30, 2022 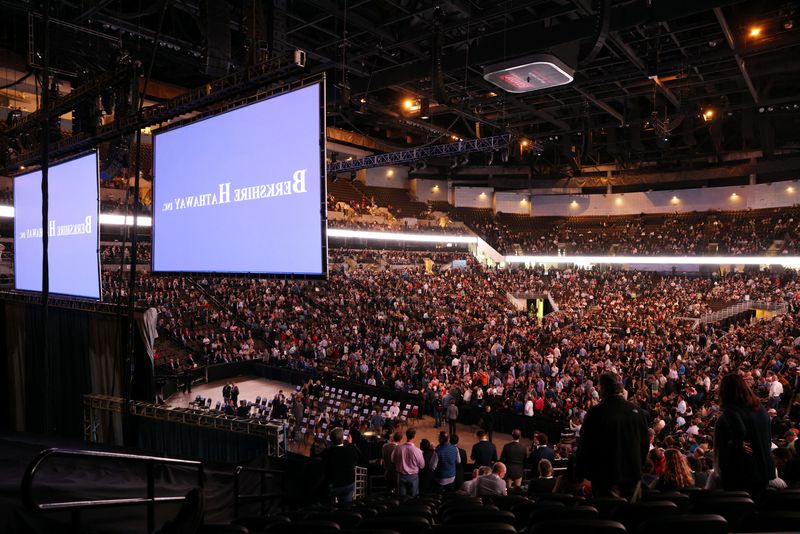 © Reuters. Investors and guests fill the arena as they arrive for the first in-person annual meeting since 2019 of Berkshire Hathaway Inc in Omaha, Nebraska, U.S. April 30, 2022. REUTERS/Scott Morgan

OMAHA, Neb. (Reuters) -Warren Buffett said on Saturday that Berkshire Hathaway (NYSE:) Inc has taken a 9.5% stake in Activision Blizzard Inc (NASDAQ:), and built most of that stake after Microsoft Corp (NASDAQ:) agreed to buy the video game maker for $68.7 billion.

The investment is a wager that Microsoft may complete its proposed $95-per-share takeover of Activision, whose franchises include “Call of Duty” and “Candy Crush,” and overcome expected tough antitrust scrutiny from the U.S. Department of Justice.

One of the portfolio managers who help Buffett invest Berkshire’s money had accumulated an approximately $1.1 billion Activision stake late last year, but Buffett made clear he’s responsible for the rest.

The 9.5% stake is worth about $5.6 billion based on recent Activision shares outstanding. Buffett said Berkshire will file a report with regulators if the stake reaches 10%.

“If the deal goes through we make some money, and if it doesn’t go through who knows,” Buffett said. “But if we do file that report, understand very clearly, it was Warren Buffett’s decision, and he doesn’t know what the Justice Department will do.”

Activision shares closed Friday at $75.60, which is 20% below Microsoft’s proposed takeover price.

That signals that some investors remain unconvinced the merger will win necessary approvals.

Buffett’s investment is a form of merger arbitrage, and departs from his usual practice of investing in what he believes are strong companies that the market undervalues.

The Activision investment is the latest of a series of multi-billion dollar investments by Berkshire this year.

Berkshire ended March with about $106 billion of cash and equivalent, a more than $40 billion drop from the end of 2021. Buffett has pledged to keep at least $30 billion on hand.

Laurence Fletcher in London and Derek Brower in New York

The Best Ways to Save on Phone Apps