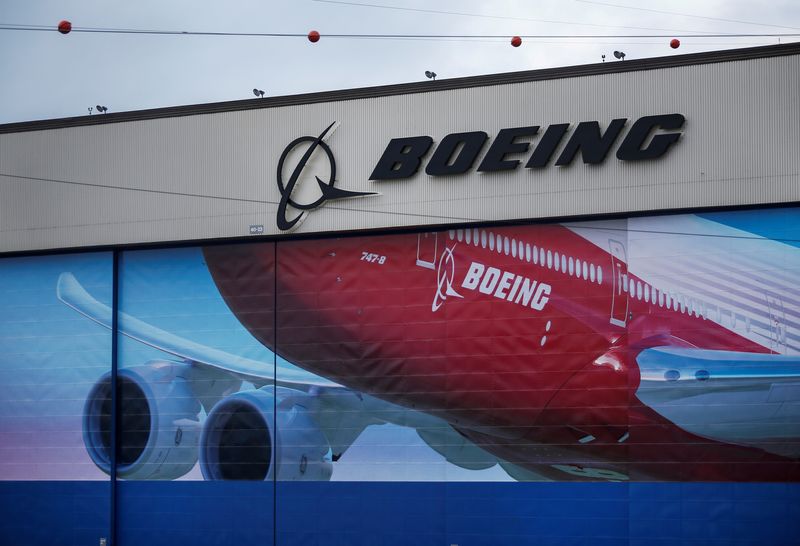 © Reuters. FILE PHOTO: A Boeing logo is seen at the company’s facility in Everett after it was announced that their 777X model will make its first test flight later in the week in Everett, Washington, U.S. January 21, 2020. REUTERS/Lindsey Wasson

RENTON, Wash. (Reuters) – Boeing (NYSE:) Co has, for the moment, sidestepped one particular supply chain snag that curbed 737 MAX output and deliveries last month, and is working to stabilize production at its targeted monthly rate, an executive said on Wednesday.

“We’ve been ramping up to 31 a month,” Dennis Eng, 737 Program Business Operations Director, told reporters during a tour of Boeing’s single-aisle factory south of Seattle. “I think we hopefully expect to get there later on this year.”

“Really it depends on making sure that we’ve got the right number of trained personnel and the parts available on time,” Eng said. “For what we’ve got in the factory right now, we have the parts that we need.”

Eng’s comments came during the first large-scale, on-the-record tour for journalists of its 737 factory south of Seattle since the jet was grounded in 2019 following two crashes that killed 346 people.

Eng said Boeing’s focus extends deep into the supply chain, rooting out problems, as well as on a hiring drive for mechanics and engineers needed to avoid shortfalls that hit Boeing during the pandemic.

Boeing said last month jet production and deliveries were slowed by trouble getting a particular wiring connector – emblematic of broader parts and labor shortages magnified by the coronavirus pandemic and war in Ukraine.

Overall, the factory was primed to produce 31 jets monthly to plan, Boeing said last month. It has said repeatedly it aimed to reach 31 planes per month by the end of June.

Supply chain problems are among a broader host of certification and industrial problems that have rippled across the U.S. planemaker’s jet portfolio, curbing its ability to emerge from the pandemic and the 737 MAX safety crisis.

Boeing separately said on Wednesday it had named Mark Fava, a company attorney and veteran naval flight officer, to the role of ombudsman to provide Boeing employees handling certification work with a way to raise concerns. Fava’s job was required by a 2021 legal settlement over fatal 737 MAX crashes.

Production and delivery delays have curbed Boeing’s ability to tap resurgent demand for jets out of the pandemic.