By Roman Olearchyk in Kyiv and David Sheppard in London On Apr 14, 2022 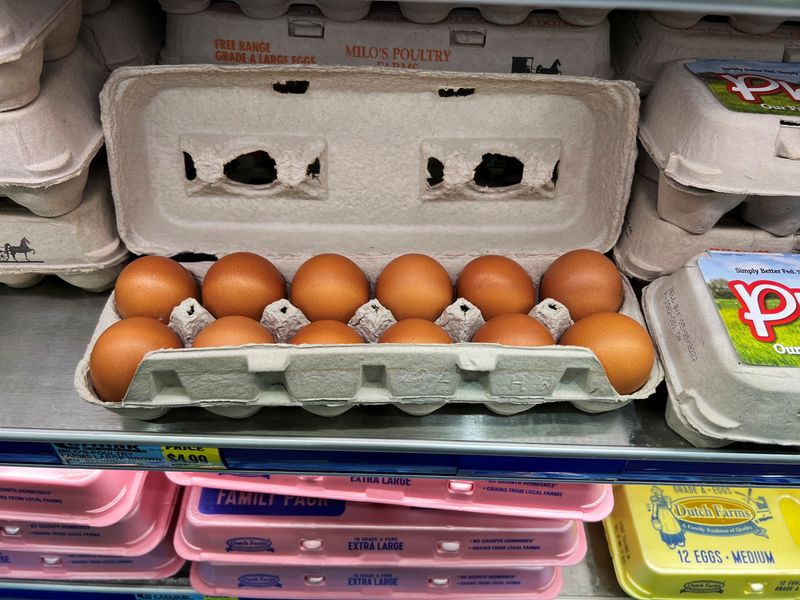 CHICAGO/PARIS (Reuters) – Severe outbreaks of bird flu in the United States and France are tightening global egg supplies and raising prices for the food staple as the war in Ukraine disrupts shipments to Europe and the Middle East.

Higher prices are particularly painful for consumers who rely on eggs as a low-cost source of protein and substitute for more expensive meat. Demand jumps around the Easter and Passover holidays in the United States and Europe as families use eggs to bake and dye Easter eggs.

Bird flu has wiped out more than 19 million egg-laying chickens on commercial U.S. farms this year in the worst outbreak since 2015, eliminating about 6% of the country’s flock, according to Reuters calculations of federal and state government data. France, meanwhile, is suffering its worst outbreak ever in which about 8% of egg-laying hens have been culled.

When poultry are infected, entire flocks are culled to contain the disease, which is often spread by wild birds.

The deadly virus and war are the latest challenges for egg suppliers also grappling with labor shortages and high costs for energy and grain used for animal feed.

Higher egg prices eat into profits for bakeries and food companies grappling with increased costs for flour and other goods. World food prices jumped nearly 13% in March to a new record high as the war in Ukraine, a major exporter of wheat and corn, pushed up grain prices, the U.N. food agency said.

Egg prices are expected to stay elevated, producers said, as it will take months to resume operations on infected farms. Infections also hamper work at facilities that process shell eggs into products like dried eggs and liquid eggs used in food items such as cake and pancake mixes and egg sandwiches.

“The product industry is in a general panic,” said Marcus Rust, chief executive of Rose Acre Farms, the second-largest U.S. egg producer. The company lost about 1.5 million egg-laying chickens at an Iowa farm infected by bird flu, which also sidelined a processing plant, he said.

‘EVERYBODY IS RUNNING SHORT’

Iowa, the top U.S. egg-producing state, has suffered badly with the culling of two flocks that each contained more than 5 million laying chickens. On Wednesday, Nebraska said a flock of more than 1.7 million laying hens would be culled. The sheer size of such poultry operations accelerated the impact on the U.S. food industry, compared to Europe where farms are smaller.

Wholesale prices for large eggs in the U.S. Midwest topped $3 per dozen in March and reached the second-highest level ever, up nearly 200% from a year earlier on the spot market, data firm Urner Barry said. Prices remained below the record of $3.09 per dozen set at the beginning of the COVID-19 pandemic. Egg products like liquid whole eggs are at record highs, though, Urner Barry said.

In France, wholesale shell egg prices have climbed 69% from last year, French farm office FranceAgriMer said. As a result, consumers could see higher prices for food products made with eggs.

“When you produce mayonnaise, it is quite complicated when egg prices surge,” said Jean-Philippe Puig, chief executive of French agri-food group Avril, which owns sauce maker Lesieur. “You must turn to supermarkets and convince them to accept a price rise.”

The United States increased egg imports from countries including France, Italy and Spain to boost supplies after its worst-ever outbreak of bird flu in 2015, according to U.S. government data. Imports are a less viable option now because of outbreaks in Europe, analysts said.

“It is very much turning into a global issue in terms of the overall shortage,” said Karyn Rispoli, Urner Barry egg market reporter. “Unfortunately now everybody is running short on supply.”

The outbreak of war, not just disease, is disrupting supply chains for Middle East buyers.

Santosh Kumar, who imports eggs for Farzana Trading in the United Arab Emirates, said he is not aware of shipments from Ukraine into the UAE for the past two weeks. Farzana is importing eggs from Turkey instead, he said.

Ukraine has in recent years been the EU’s main egg supplier, accounting for about half of the imports, ahead of the United States.

“There is a bird flu problem in France but also throughout Europe,” he said. “The is no other European country that would have a large volume to compensate for the shortfall.”

French food manufacturers will likely reduce output of some processed goods or adjust their recipes to cope with high egg prices, said Coulombel, who produces about 1 million eggs in France’s Brittany and Normandy regions.

In Green Bay, Wisconsin, Liz Rehberg, owner of cake and pastry shop The Bakery, said the price for 15 dozen eggs climbed to $45 from $26 in recent weeks. She is considering whether to raise prices or reduce the sizes of her baked goods.

“You’re just ordering it because you need eggs,” Rehberg said. “Then you look at the price and you go, ‘Oh my God.'”

Roman Olearchyk in Kyiv and David Sheppard in London

DecentWorld Metaverse On Bridging Our and Virtual Realities