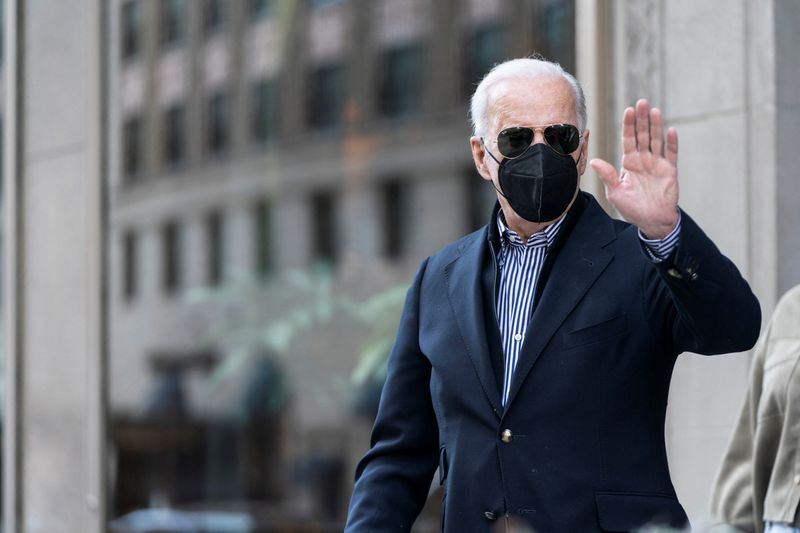 © Reuters. U.S. President Joe Biden waves as he departs the Hamilton restaurant where he had lunch with his granddaughters Finnegan Biden, Naomi Biden, and Peter Neal in Washington, U.S., February 19, 2022. REUTERS/Joshua Roberts

Putin’s recognition of the rebel-held areas could pave the way for Moscow to send military forces into the two regions – Donetsk and Luhansk – and argue that it is intervening as an ally to protect them against Ukraine.

“We have anticipated a move like this from Russia and are ready to respond immediately,” White House spokesperson Jen Psaki said in a statement. “President Biden will soon issue an Executive Order that will prohibit new investment, trade, and financing by U.S. persons to, from, or in the so-called DNR and LNR regions of Ukraine.”

The order will “also provide authority to impose sanctions on any person determined to operate in those areas of Ukraine,” Psaki said.

Psaki said more measures were forthcoming and said these were separate from sanctions that the United States and its allies have been preparing if Russia invades Ukraine.

“To be clear: these measures are separate from and would be in addition to the swift and severe economic measures we have been preparing in coordination with Allies and partners should Russia further invade Ukraine,” she said.

Biden, who convened a meeting with his national security team at the White House earlier in the day, held a 35-minute call with Ukrainian President Volodymyr Zelenskiy and had a call with French President Emmanuel Macron and German Chancellor Olaf Scholz.

“We are continuing to closely consult with Allies and partners, including Ukraine, on next steps and on Russia’s ongoing escalation along the border with Ukraine,” Psaki said.