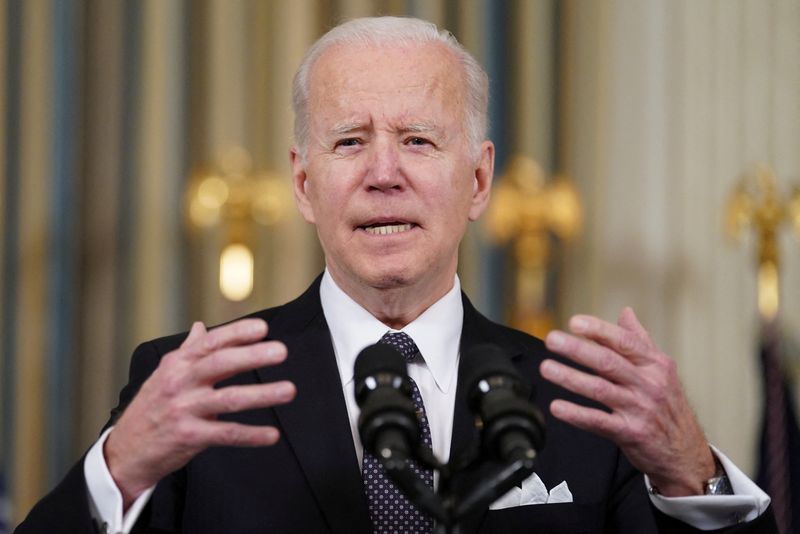 © Reuters. FILE PHOTO: U.S. President Joe Biden responds to a question about Ukraine during an event to announce his budget proposal for fiscal year 2023, in the State Dining Room at the White House in Washington, U.S., March 28, 2022. REUTERS/Kevin Lamarque/File Ph

By Nandita Bose and Alexandra Alper

Speaking to reporters, the two leaders condemned Russia’s invasion of Ukraine and stressed the importance of stability in the Indo-Pacific region and freedom of navigation in the South China Sea amid concerns about China exerting its influence there.

Biden and Lee also criticized the policies of Myanmar’s military government, after a meeting in the Oval Office.

North Korea last week tested a powerful new type of intercontinental ballistic missile that marked an end to a self-imposed moratorium on long-range testing in place since 2017. https://www.reuters.com/world/asia-pacific/nkorea-fired-unidentified-projectile-off-east-coast-skorea-military-2022-03-24

Biden said he and Lee shared their concerns about the North Korean launches, which he said were in clear violation of various U.N. Security Council resolutions.

“We both urge North Korea to refrain from further provocations and return to the negotiating table for serious and sustained diplomacy,” said Biden.

Biden said he was looking forward to hosting in Washington later this spring a special summit of the leaders of the Association of Southeast Asian Nations. An ASEAN summit planned for this week was postponed because of scheduling issues.

Lee welcomed increased U.S. involvement in the Indo-Pacific, which he said would strengthen America’s engagement and the evolving regional economic architecture.

He spoke against Russian aggression in Ukraine in particular and advocated for the territorial integrity of all nations in a broader context.

“The sovereignty, political independence and territorial integrity of all countries big and small, must be respected,” Lee said. “The unprovoked military invasion of a sovereign country under any pretext is unacceptable.”

At the start of their talks, Biden told reporters the United States supports implementing its Indo-Pacific strategy despite the current focus on Europe during the Russia-Ukraine conflict.

Ahead of the meeting, a senior administration official told reporters the United States was pleased with Singapore’s decision to impose sanctions and export controls on Russia over its invasion of Ukraine last month.

Russia calls its actions in Ukraine a “special military operation” that it says is not designed to occupy territory but to destroy its southern neighbor’s military capabilities and capture what it regards as dangerous nationalists.

The Biden administration announced an Indo-Pacific strategy in February in which it vowed to commit more diplomatic and security resources to the region to counter what it sees as China’s bid to create a regional sphere of influence.