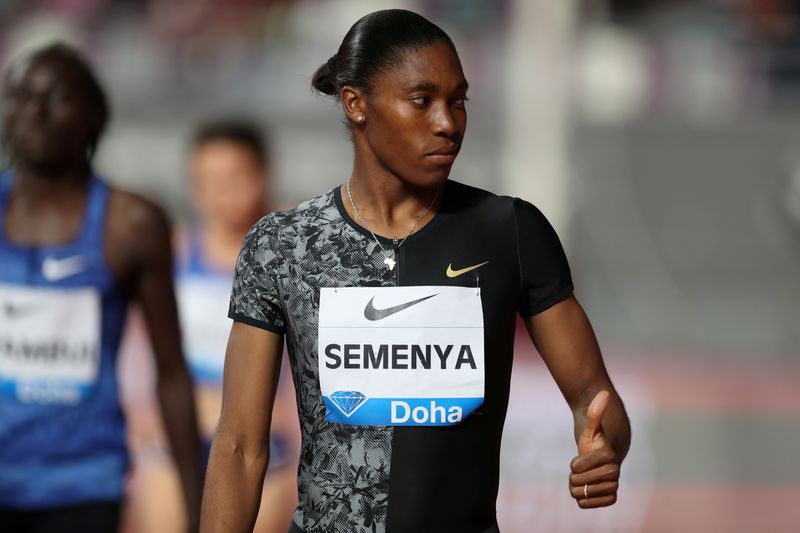 (Reuters) – Double Olympic 800 metres champion Caster Semenya offered to show her vagina to athletics officials when she was 18 to prove she was female, the South African middle-distance runner said in an interview with HBO’s Real Sports that will air on Tuesday.

Semenya, now 31, burst onto the scene in 2009 when she won the women’s 800m world title by a stunning margin hours after the sport’s world governing body said she would undergo gender verification tests.

Gender tests on Semenya reportedly showed the runner had no womb or ovaries but that she had internal testes, the male sexual organs which produce testosterone, and her levels of the hormone were three times that of a “normal” female.

Semenya has a condition known as hyperandrogenism, which is characterised by higher than usual levels of testosterone, a hormone that increases muscle mass and strength and the body’s ability to use oxygen.

She took medication after the first ruling in 2011 by World Athletics – then the International Association of Athletics Federations – that all female athletes with hyperandrogenism had to medically lower their testosterone levels.

“It made me sick, made me gain weight, panic attacks, I don’t know if I was ever going to have a heart attack,” Semenya told HBO Real Sports. “It’s like stabbing yourself with a knife every day. But I had no choice.

“You say medically it’s not healthy for me, then my question back to you is: ‘Why do the world’s leading experts say that that is what we would prescribe?'” said Taylor.

Semenya fired back: “Jonathan must cut his tongue and throw it away. If he wants to understand how that thing has tortured me, he must go and take those medications. He will understand.”

In 2020, Semenya lost her appeal to the Swiss Federal Tribunal to set aside a 2019 Court of Arbitration ruling that female athletes with high natural testosterone levels must take medication to reduce it.

She had approached the tribunal after CAS, sport’s highest court, ruled that the regulations of World Athletics were necessary for athletes with DSDs in races ranging from 400 metres to a mile to ensure fair competition.

Chapter 3: Saving for College for Your Child