By Henry Foy in Brussels and Guy Chazan in Berlin On May 5, 2022 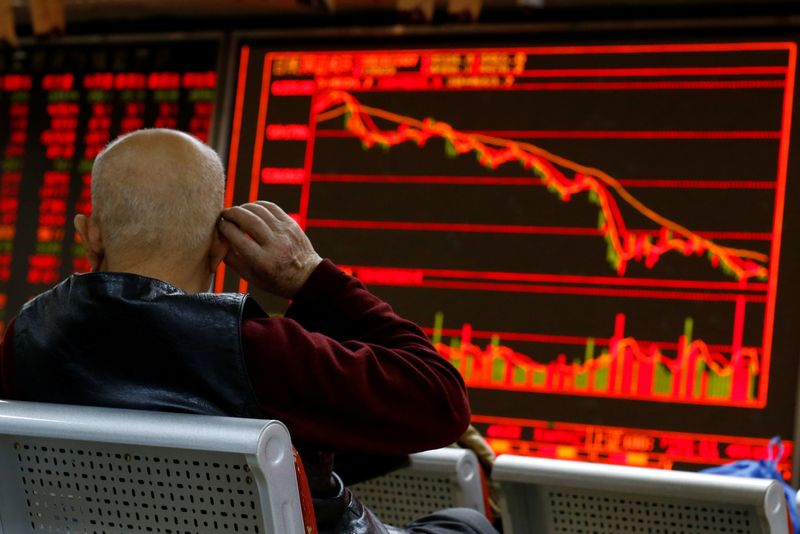 © Reuters. FILE PHOTO: An investor sits in front of a board showing stock information at a brokerage office in Beijing, China, December 7, 2018. REUTERS/Thomas Peter

HONG KONG (Reuters) – Asian shares tumbled on Friday while the U.S. dollar and Treasury yields rose in a reversal of a day earlier after investors expressed concerns that rising interest rates could hurt global economic growth.

The market fears that the U.S. Federal Reserve and some other major central banks will have to raise interest rates even more aggressively than planned to combat red-hot inflation, potentially pushing economies into a recession.

U.S. payroll data due later on Friday will help the market gauge how hot the economy is running.

MSCI’s broadest index of Asia-Pacific shares outside Japan shed 2.34% on Friday morning and is down 3.5% from last Friday’s close. was flat on its return from a three-day holiday.

Overnight on Wall Street, the and the both fell more than 3%, and the shed 4.99% in its biggest single-day plunge since June 2020 to close at its lowest level since November 2020.

This was a reversal of the situation 24 hours earlier when Asian shares opened higher after the S&P 500 had recorded its biggest one-day percentage gain in nearly two years on Wednesday.

“It’s been described in one news story I read this morning as the ‘Great Puking’, which seems appropriate,” ING Asia head of research Rob Carnell said of the rapid U-turn in a morning note to clients.

The market is pricing in an 82% chance of a monster 75 basis point rate hike from the Fed at its meeting in June, according to the CME’s FedWatch tool, even after the Fed raised rates by 50 basis points this week and Powell ruled out a 75 basis point hike.

“Risks remain elevated for a policy mistake – either by (the Fed) not tightening quickly enough to combat inflation or being overly hawkish, resulting in the end of the current business cycle,” said David Chao, global market strategist, APAC ex-Japan, at Invesco.

Chao said U.S. and Asia Pacific equities could continue to experience “a bit of volatility”, and U.S. yields might keep rising, but he expected that momentum from the post-Omicron reopening would help support U.S. growth despite Fed policy normalisation.

U.S. yields are rising on expectations of a fast pace of rate hikes. The yield on U.S. 10-year notes was 3.084% on Friday morning after crossing 3.1% overnight for the first time since November 2018.

A firm commitment by Chinese leaders to maintain a zero-COVID strategy raised fears about the health of the country’s economy, while the ongoing war in Ukraine is also hurting sentiment toward risk.

As investors moved towards less risky assets, the was at 103.67 on Friday morning, having hit a fresh 20 year peak of 103.94 overnight supported by expectations the U.S. will hike interest rates faster than other central banks.

Sterling for example fell 2.2% against the dollar on Thursday. The Bank of England raised rates by 25 basis points as expected but two policy makers expressed caution about rushing into future rate hikes.

one of the risk-friendliest assets tumbled 8% overnight and hit a two-and-a-half-month low. It was last trading around $36,300.

Oil prices dipped at the start of Asian trade as worries about an economic downturn outweighed concerns over fresh E.U. sanctions against Russia, including a crude oil embargo.

Henry Foy in Brussels and Guy Chazan in Berlin

Biden meets with labor organizer at Amazon after Senate hearing