Allianz sets aside another $2 billion over fund debacle 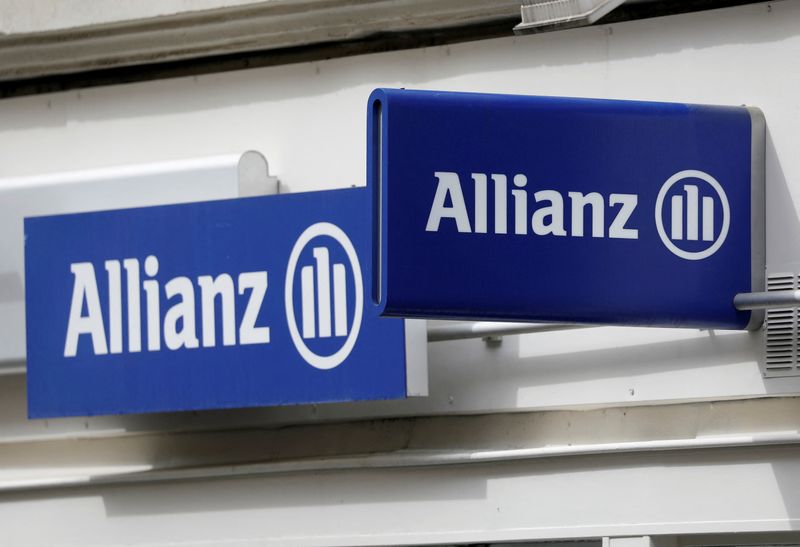 © Reuters. FILE PHOTO: The logo of Allianz is seen on a building in Paris, France, April 30, 2020. REUTERS/Charles Platiau

By Tom Sims and Alexander Hübner

FRANKFURT (Reuters) -Germany’s Allianz (ETR:) said on Wednesday it would set aside another 1.9 billion euros ($2 billion) as it braces for the outcome of U.S. regulatory investigations into a multibillion-dollar trading debacle at its funds arm.

The collapse of a $15 billion set of investment funds during the pandemic market turmoil in early 2020 has cast a long shadow over Germany’s most valuable financial firm and one of the world’s largest asset managers.

The new provision comes on top of 3.7 billion euros the company set aside in February to cover litigation and U.S. regulatory investigations into the funds’ demise. It brings the total to 5.6 billion euros.

The collapse of the funds has been under investigation by the U.S. Justice Department and the Securities and Exchange Commission, Allianz has disclosed, as well as the subject of numerous investor lawsuits.

Allianz said the additional provision should cover the remaining costs it could incur. The sense of certainty suggests a settlement with the U.S. government could be in the offing.

“This provision booked is a fair estimate of its remaining financial exposure in relation to compensation payments to investors and to payments under any resolution of the governmental proceedings,” Allianz said.

Allianz said it was seeking a “timely” resolution to its talks with the DOJ and SEC.

Its shares traded 2.8% higher in mid-morning Frankfurt trade, outperforming a 1% gain in the of blue-chips stocks.

“Allianz seems to have come a significant step closer to a conclusion on the risk from the…funds,” said Steffen Weyl, a fund manager with Union Investment, which is an Allianz shareholder.

Analysts with Jefferies said the provision, coming earlier and smaller than expected, removes “a substantial overhang on the shares”.

CEO Oliver Baete has apologised to investors and shareholders for the matter, conceding “not everything was perfect in the fund management”.

Baete and other top managers took a cut in last year’s bonuses as a result, though Baete earned 9% more in 2021 than a year earlier.

The issue has worried Allianz’s top shareholders and harmed its reputation with pension funds that provide a source of business for one of Germany’s best known brands.

The issue centres around Allianz funds that used complex options strategies to generate returns but racked up massive losses when the spread of COVID-19 triggered wild stock market swings in February and March 2020.

For Allianz, which has 2.6 trillion euros of assets under management, the issue has already dented earnings. Its 2021 profit was the lowest since 2013.

Investors in the so-called Structured Alpha set of funds have claimed some $6 billion in damages from the losses in cases filed in the United States.

The set of funds catered in particular to normally conservative U.S. pension funds, from those for labourers in Alaska to teachers in Arkansas to subway workers in New York.

The Arkansas Teacher Retirement System was the first of at least two dozen lawsuits lodged against Allianz in the aftermath of the collapse.

The Arkansas pension fund, which had $1.6 billion in three Structured Alpha funds at the end of 2019, said in its July 2020 lawsuit that it had lost at least $774 million due to “negligent mismanagement” of the funds.

It secured a settlement of $642 million, according to minutes of a board meeting.