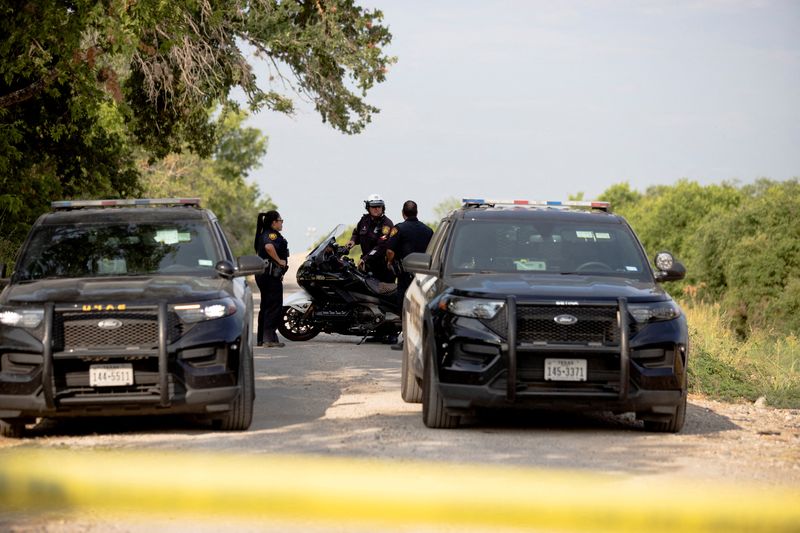 By Jason Buch and Dave Graham

SAN ANTONIO/MEXICO CITY (Reuters) -The alleged driver of a truck carrying dozens of migrants who died in the suffocating heat in Texas this week initially tried to pass himself off as a victim to escape authorities before he was arrested, U.S. and Mexican officials said on Wednesday.

The death toll in the incident rose to 53 as some migrants who had been trapped in the sweltering tractor-trailer died in the hospital, local officials said.

The truck was discovered on Monday in a desolate area near a highway in San Antonio, where temperatures that day soared as high as 103 Fahrenheit (39.4 Celsius).

Mexicans made up about half of the deceased who perished after being trapped in the back of the truck. Dozens of Mexican families this week have waited anxiously for news of missing loved ones who they fear may be among the dead.

A Mexican official and two U.S. officials, all speaking on condition of anonymity, identified the alleged driver as Homero Zamorano, 45 and an identification document seen by Reuters showed he had an address in Houston, Texas. Surveillance photographs published by Mexican immigration officials captured the truck driving through a security checkpoint in Laredo, Texas, at 2:50 p.m. CT (1950 GMT) on Monday.

U.S. authorities detained two Mexican men in addition to the driver who were arrested leaving a house in San Antonio. On Wednesday, U.S. prosecutors were moving ahead with weapons charges against them.

A federal judge in San Antonio, Texas, ordered the suspects – identified as Juan Francisco D’Luna-Bilbao and Juan Claudio D’Luna-Mendez – detained until a preliminary hearing on Friday. Both men were charged on Tuesday with possessing firearms while residing in the United States illegally.

Francisco Garduno, the head of Mexico’s National Migration Institute, said at a news conference on Wednesday that the tractor-trailer passed through two U.S. Customs and Border Protection checkpoints in Texas, where it was captured on security cameras.

The first was in the town of Encinal, 40 miles (65 km) north of Laredo, and the second in Cotulla, 30 miles farther north.

Garduno later told reporters the trailer did not cross the U.S.-Mexico border with the migrants inside.

“The migrants were already on U.S. soil,” before entering the truck, he said.

A source within Mexico’s immigration institute said, given smuggling dynamics, the migrants likely crossed the border in smaller groups before being concentrated in a smuggling stash house on the U.S. side and then squeezed into the tractor-trailer to be moved farther into the United States.

Between 6,000 and 6,800 trucks cross northbound through the Nuevo Laredo-Laredo international port of entry daily, according to Mexican customs data.

Garduno said on Wednesday that 14 Hondurans, seven Guatemalans and two Salvadorans died alongside the 27 Mexican fatalities reported a day earlier.

One of the bodies found in Texas had not yet been identified, and 16 migrants were still in six local hospitals, Garduno said. Three of the injured are Mexicans, and the nationalities of 13 others remain unclear, he added.

Garduno said there were 67 migrants on board the truck, lower than earlier estimates by some U.S. officials.