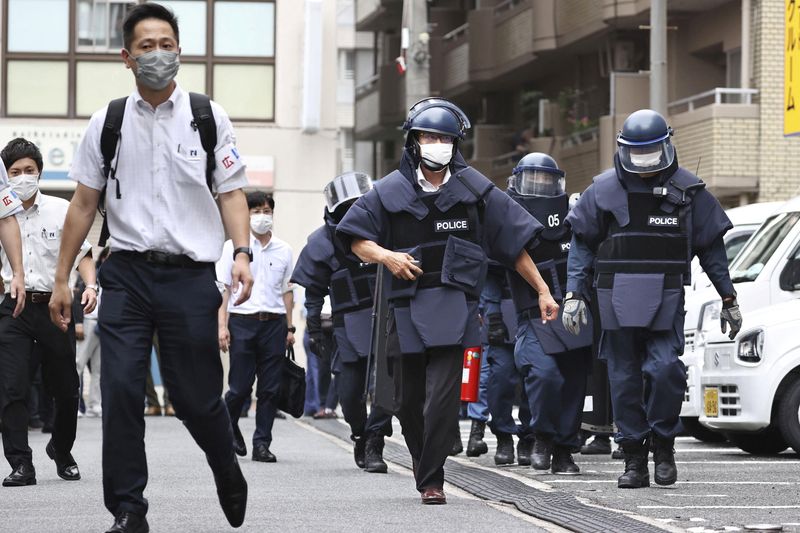 © Reuters. Police investigators arrive at the residence of the suspect who was believed to have shot former Japanese Prime Minister Shinzo Abe, in Nara, Japan July 8, 2022 in this photo taken by Kyodo. Kyodo via REUTERS

By Yoshifumi Takemoto and Ju-min Park

TOKYO (Reuters) – The fatal shooting of former Japanese premier Shinzo Abe from close-range at a political rally on Friday has raised questions about protection for high-profile figures in a country where political violence and gun crimes are extremely rare.

Politicians in Japan often travel with fairly light security details compared to their peers in the United States and other countries that have higher rates of violent crime.

Abe, 67, was campaigning in the western city of Nara for Liberal Democratic Party (LDP) candidates ahead of a Sunday election when he was shot, with Nippon TV saying the assailant was about 3 metres (10 feet) away.

Police arrested a 41-year-old male suspect and said later the shooting was carried out with a home-made gun and the suspect had admitted to the act.

An official of the Nara prefectural police department told reporters the department would look into whether security at the event was sufficient and take appropriate action. More guns were found at the suspect’s home, the official said.

Nippon Television quoted Nara police as saying Abe was protected at Friday’s rally by one armed specialised police officer who travelled from Tokyo, and some other local officers.

When contacted by Reuters, Nara police declined to say how many police officers were handling Abe’s security.

When he was shot Abe was standing at an intersection outside a train station, speaking to a crowd of hundreds as buses and vans passed behind his exposed back on the road where the assailant appeared.

Several commentators said security around the former premier should have been stronger.

“Anyone could have hit him from that distance,” Masazumi Nakajima, a former Japanese police detective, told Japan’s TBS television. “I think that security was a little too weak.”

“The person needs to be covered from all directions,” Koichi Ito, a VIP security specialist, told national broadcaster NHK. “If this kind of thing isn’t carried out 100%, it’s no good.”

Abe’s assassination was the first of a sitting or former Japanese premier since the days of prewar militarism in the 1930s. Then-Prime Minister Tsuyoshi Inukai was assassinated by radical naval officers in 1932.

There were just 10 firearm-related incidents in Japan last year, only one of them fatal, according to the National Police Agency.

Paul Nadeau, who has been on campaign events with Abe in the past, said stump speeches like Friday’s are “almost intimate events”.

“The public is close by, they’re usually filling a town square in front of the train station,” said Nadeau, who previously worked for an LDP official and is now an adjunct professor at Temple University of Japan in Tokyo.

“You never got any feeling of insecurity or danger or anything like that.”

Iwao Horii, an LDP member who was standing next to Abe when he was shot, said preparations for the event were not unusual with about 15 party staff tasked with crowd control and security handled by the local police.

All major parties announced suspensions of election campaign activities after the shooting.

Several recent campaign events attended by Abe, who was Japan’s longest serving prime minister and one of the country’s most influential political figures, had drawn large crowds.

One ruling party source told Reuters on condition of anonymity that despite Abe’s high profile, the level of security he was provided had likely dropped since he left office in 2020.

The suspected gunman shot at Abe with a device that had a pistol grip and two pipes covered in black electrical tape, according to photos and video images of the incident.

A man in a black suit grabbed the suspect after the shooting, while two others – one carrying a briefcase – rushed to assist, photos showed.

Grant Newsham, a retired U.S. Marine Officer and former diplomat at the Japan Forum for Strategic Studies, said he would expect more caution and somewhat tighter protection of senior politicians in Japan following the assassination.

“Questions will be being asked about security. Clearly security would have been far tighter for, say, (Prime Minister Fumio) Kishida,” added Robert Ward, a London-based senior fellow for Japanese Security Studies at the International Institute for Strategic Studies.

“But proximity to voters is a feature of Japanese campaigning. I’ve been at campaign rallies and the public is close. Perhaps this will change. If so, it would be a shame.”